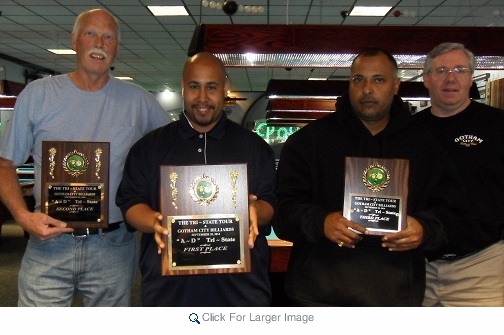 On September 20-21, 2014, Luis Jimenez captured another Tri-State Tour win at Gothem city Billiards in Brooklyn, NY. Jimenez who is no stranger to New York’s Pool scene has not won a Tri-State event since Last year in June of 2013.The tournament brought out a field of 59 players with $2,500 added to the event.

Jimenez went undefeated in the winner’s Bracket, chalking up wins against Dennis Kennedy (7- 5), Mike Figueroa (7-2), Jaret Buyund (7-6), T.J. Aguis (7-4), Nick Antonakos (7-5), and Jose Mendez (7-4), to shield his position in the final match. There were four players who began working their way through the one-loss side to see who would make it out of the quarterfinals. Player Eric Grasman defeated Robert Pamilar (8-4), while TJ Aguis knocked out Nick Antonakos (6-3). Grasman ended up defeating Aguis by a score of (9-6). Grasman’s streak came to an abrupt halt when he met up with Jose Mendez who delivered Grasman’s first loss of the event (7-5). Mendez would meet Grasman again in the semifinals to which Grasman would prevail over Mendez (7-2).

The final match would post, Grasman and an undefeated Luis Jimenez together for the event title. In the end, Jimenez continued his run and clinched the event title from Mendez by finishing the match (8-4). Congratulations to Luis Jimenez for claiming his 2nd undefeated title win on the Tri-State Tour’s stop # 10.