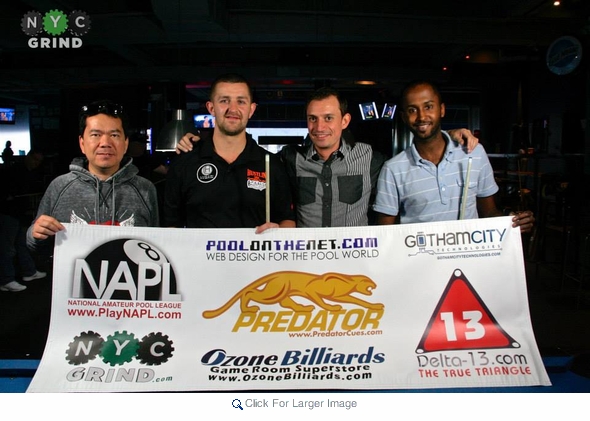 The Predator Pro-AM tour’s 20th stop of the season was held at Cue Bar in Bayside, NY. The Open/Pro 10-Ball division occurred Sunday, October 5, 2014. Jason Shaw would return to the Predator Pro/Am Tour and battle his way back from the one loss side to take the top spot.

Jason Shaw was dealt a loss from top Filipino touring pro Warren Kiamco (7-2) pushing Shaw over to the one-loss side. After defeating Shaw, Kiamco went on a strong run with wins over international players Al-Hassan (7-5) and Ali Al-Marri (7-2) positioning Kiamco in the hot seat for the finals. Shaw being dealt a loss early made his way back through the opposition and played Al-Hassan for the semi finals, shutting Al-Hassan out with a score of (7-0). The finals started with Kiamco taking the lead (4-2), but before long, Shaw tied the match at (4-4). Kiamco proceeded to get to the hill at (6-4), but Shaw held on and fought back to win the final at (7-6). Congratulations, to Jason Shaw for his comeback win over a tough field of opposition. The top finishers were Jason Shaw (1st), Warren Kiamco(2nd), Waleed Al-Hassan(3rd), and Jerry Tarantola, founder of the NYC Grind placed, respectable (4th) .The next stop on the Predator Pro/Am Tour will be held at Steinway Billiards in Astoria, NY on October 11-12.