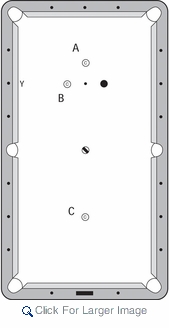 Soon after we learn a couple reliable systems for two-rail kicks we begin to look for two railers whenever a kick shot is required. Because all one-rail kicking systems are based on hitting the cue ball dead center we learn how unforgiving they are when we miss the cue ball’s center by the tiniest fraction. But since no one’s pool game is complete without a confident feel for one-rail kicks, we’re going to ring in the new year with what I consider the perfect practice shot for zeroing in on the cue ball’s center.

Let’s begin with shot A, an old, proven shot to zero in on center ball and deliver a straight stroke. Place the cue ball six to eight inches behind the foot spot and shoot it down to the center diamond on the head rail to rebound straight back through the center of the table and roll over the foot spot again. I make sure to place the cue ball behind the foot spot instead of on it when practicing this shot so I can see the line that connects the spot to the diamond on the far rail. And to ensure an accurate stroke, a long, level follow through, and the habit of staying down to complete your shots, you should follow your tip through the cue ball to the foot spot. Keep your tip there, over the spot, and stay down until the cue ball comes back to hit it. Make sure to strike the cue ball slightly above center, to produce natural roll with light-to-medium speed.

After you are hitting the first shot consistently you can add an object ball to the exercise for warm-up shot B. Place the solid ball and cue ball about a diamond segment apart from each other as shown in the diagram. Shoot the object ball straight to the side rail with a stop shot so it rebounds straight back to hit the cue ball, which is waiting for it where they first made contact. That should be relatively simple, so work for absolute precision. When you hit the shot perfectly the rebounding object ball will hit the cue ball full and send it directly backwards to point Y in the diagram.

To complete the exercise you can work with the most difficult variable, elevation. Move the cue ball back to within a few inches of the head rail and, with an elevated cue, repeat the shot beginning with the stop shot. Pay close attention to speed since elevation brings out a strong impulse to shoot too hard. Begin with moderate elevation and proceed carefully as you move the cue ball closer to the head rail in small increments to increase the necessary elevation gradually. Can you make the shot with draw? When you can produce the desired, second collision in the center of table with an elevated cue your stroke rivals world-class.

As you work with this practice shot you will see how challenging it can be to hit the cue ball dead center and shoot it straight consistently. Something else you will observe is how the tiniest bit of english transfers to the object ball and throws it off line. Be patient with this shot and practice it with care. This is not an exercise to work through one time and then shelve. Even if it is not the perfect practice shot, keep it handy anyway to visit periodically throughout your pool career, and it will deliver a big payoff.