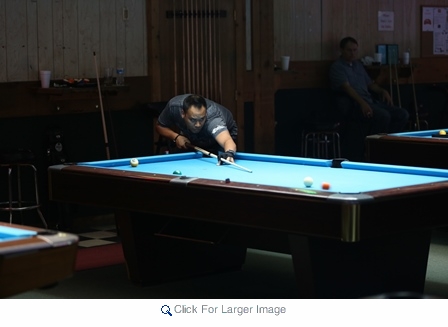 In the open division, Ernesto Bayaua cruised undefeated to the hot seat with wins over Manny Chau, 9-5, Dave DeVaney, 9-1, Cielo Velasquez, 9-3, and Will Felder, 9-4. Runner up, Manny Chau defeated Steve Williams, 7-0, Sonny Bosshamer, 7-3, and Jonathan Poon, 7-5. Sonny Bosshamer had an incredible run, defeating Alex Cardenas, 9-5, Phillip Tieu, 9-6, and Poon, 9-3. With Bayaua retaining the hot seat Chau and Bosshamer ended the semi finals with Chau moving ahead to face Bayaua. The finals would put Chau and Bayaua head-to-head with Bayaua emerging victorious over Chau, 9-5 claiming his second Lone Star Tour win of the season.

Chase Rudder and Jonathon Poon emerged from the 2014 season as the Open and Amateur Lone Star Tour Champions.It was a close points race , but when all of the numbers where crunched, these two players emerged victorious. Each player received a new Poison VX Jump Cue and Delta-13 Elite Rack for their year-long efforts. The Lone Star Billiards Tour would like to give a big thanks to all the players and room owners who help support the tour and promote the great game of billiards.