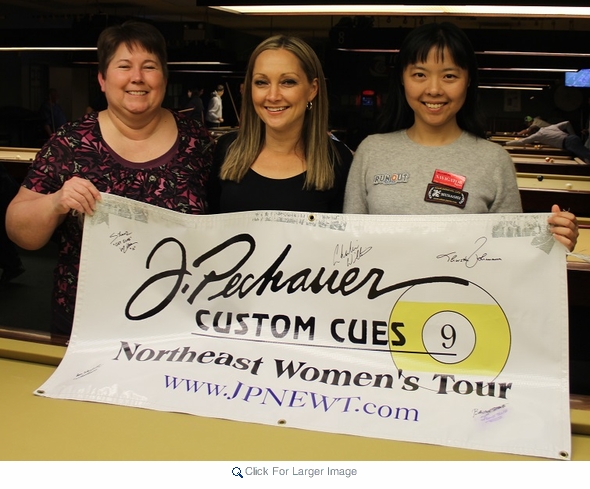 The J. Pechauer Northeast Women's Tour had 18 women come out to Proshots Billiards in Scranton, PA. This event marks stop # 8 of the season, with the year-end finals to be held November 15th -16th, at Triple Nines in Elkridge, MD.

The event kicked off with two of the tours top players drawing a match against each other; Jia Li and tour operator Linda Shea. Meeting up in the first round Jia Li defeated Linda Shea (7-2). Li went on to take down Nicole Fleming (7-2), Melissa Jenkins (7-2), Alex Calabrese (7-2), and Dawn Fox (7-5).

Local player Dawn Fox started the tournament with wins over Sharon O’Hanlon (7-3), Joey Starns (7-2), and Colleen Shoop (7-2). Fox played a close match with Li, trading games back and forth until Li hit a break and Run closing the match out 6-5. Fox went on to face Shea who was determined for a rematch against Li, defeating Fox (7-1).

Shea would once again face the women who sent her over to the one loss side so early on Saturday. Li played strong and lead the match (6-3), but could not close out the match leaving Shea a chance to edge her way back in the race to seven. The tenth rack, Linda played a tremendous safety and then ran out to make the score 6-4. But at 6-5, Li took advantage of a strong break, finishing her second set in a row with a break-and-run.

The year-end finale will be the women’s last chance to move up in the rankings and earn a spot in the WPBA Regional Tour Championships. This event will bring together 64 of the top amateur women in the country. This year's RTC will be held at Breakers Sky Lounge in Herndon, VA, January 8-11.