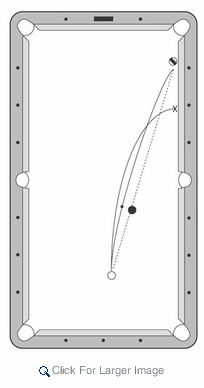 Even though we learn to massé by elevating the cue very high and shooting down on the cue ball with maximum english, the extreme curve that technique yields is too difficult to control and therefore not very useful. So, while most of us can hit shots in practice with such extreme curve, we usually shy away from them in competitive play, opting instead for a more reliable kick shot to escape a safety. Many players will however go for a shot like the one in the diagram where all that’s required is a gentle curve around an obstruction of less than a full ball as indicated by the straight, dotted line.

Most intermediate players will approach the massé shot in the diagram with the same technique used for a full massé, 70 to 80 degrees of elevation, and striking the cue ball above center to trap it between the tip and the bed of the table for maximum spin. That technique however is very difficult to control accurately, and can lead to a cue ball that gets away with too much curve, moving perhaps on the path that goes to the X, making it a low-percentage shot. But with a few adjustments to that technique, we can raise our success rate considerably for shots that require only a slight “bend” on the cue ball.

Set up the shot in the diagram with less than a full ball obstructing the path to the striped ball. Now, since the required curve to pocket the ball is rather slight, we can explore a technique that only curves the cue ball slightly. First make an open bridge that rests on the heel of the hand and raises the top row of knuckles by drawing the fingertips toward the wrist. It should not be necessary to prop the bridge up on the fingertips as we do when shooting over a ball. Next, lower the butt’s elevation down to about 25 to 30 degrees. Elevation is controlled easily with the bridge hand’s distance from the cue ball, which should be rather close for this shot, three to four inches. The final, most important element of control is striking the cue ball slightly below center with extreme right-hand english, and a slightly slower than normal punch stroke. The below-center hit eliminates the possibility of trapping the cue ball between the tip and the slate and thus limits the resulting curve dramatically. The point to aim for is the space just to the left of the obstructing ball, indicated by the dot in the drawing.

As the setup changes we can adjust some of the variables to control exactly how the cue ball curves. With consistent application of the described technique, speed becomes the critical variable—more speed makes the cue ball travel farther before it curves. So when the obstruction is farther, we must hit the shot a little harder and, of course, softer when the obstructing ball is closer. A softer hit yields a greater overall curve. Changing the spot on the cue ball also influences the arc that it will trace as a higher hit introduces greater curve. Naturally, adding english makes the cue ball curve more as will increasing elevation. Since I only use this technique for a shot like the one diagrammed, I find that I play it with consistent elevation and english, relying mostly on speed adjustments to hit the desired path.

Now that trick-shot tournaments turn up regularly on TV, it’s easy to imagine players everywhere trying some of the extreme massé shots that they’ve seen the masters shoot in their artistic programs. And when compared to some of the amazing possibilities that we see when the pros shoot massé shots, this month’s shot is decidedly unimpressive. Its only dazzling feature in fact is that it can win matches.