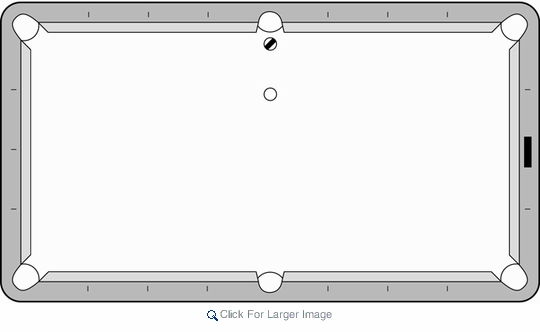 Anyone who’s been around me while I’m teaching or has followed along with some of my writing can probably tell you that I talk incessantly about the stop shot and its value. I’m sure that if I were a doctor I would find a way to prescribe it for most ailments. But why shouldn’t someone in my profession emphasize the importance of the single most reliable shot in the game of pool? Its only shortcoming is that we cannot use it to solve every single position problem we face.

As soon as we feel that we have some mastery over the stop shot, we recognize its power and begin approaching every shot with the question, “What will a stop shot give me here?” Once that takes hold as part of the shooting process, a player sees how amazingly often the stop shot works to design run outs. Unfortunately, we can’t use it for every shot and must learn the full set of position techniques to assemble a complete pool game.

With the stop shot and stun draw now under our belts we can begin to work with draw and refining our control over it. Unlike the stop shot which guarantees an exact outcome, or, in the case of applying it to a cut shot, an exact cue-ball track, the draw shot requires a strong sense of control to move the cue ball into accurate position. Set up the simple shot in the diagram with the balls about 10-12 inches apart and mark their positions to keep the shot the same for every attempt.

This simple exercise is one I learned from the Monk and it’s unrivalled for refining control over the draw shot. Hit the first shot and move the cue ball backwards. Set a piece of chalk next to it to mark its position, then reset the balls to repeat the shot and move the cue ball backwards more than on the previous attempt. Your goal is to shoot as many shots as possible. As long as you beat the previous draw shot you get to shoot again. When the cue ball fails to move back farther than it moved on the last shot, that trial ends and you record your score. Since the goal is to shoot the most possible shots, we must work to beat the last shot by the smallest possible margin. Imagine yourself crossing the table with the cue ball, a quarter inch at a time, and the number of shots that would consume. More realistically, a score of 10 is quite respectable when you first start working with this exercise.

On the surface the exercise may not look like much, but it can be deceptively difficult since it requires a set of skillful strokes for success. In the beginning, instead of a normal draw shot, the first few shots call for stun draw. For stun draw, we prepare for a firm, just-below-center stop shot and then lower the tip a hair on the cue ball. A firm punch stroke causes the cue ball to slide back a short distance. Practice the first shot until the cue ball appears to bounce backwards from the object ball, say a half inch or less. Then, by lowering your tip a hair at a time, stun the cue ball back ever so slightly more with each successive shot. You can shoot stun draws for the first 6 or 8 inches of backwards movement. And you’ll find that, after some practice, the stun draw offers amazingly precise control.

Eventually you must make the transition to a regular draw shot. Great draw lives at the bottom of the cue ball. So do not be afraid to hit it low. When I need my best draw, the under edge of my tip often touches the table. Take a look some time at how low most pros go with their tips when they hit draw. Remember to deliver a smooth, accelerating, level stroke with good follow through and a light grip. Many players, in an attempt to deliver more force, tense up the grip and kill the acceleration. The number-one cause of bad draw is trying too hard. Practice some draw shots outside of the exercise until they feel relaxed and easy.

In the context of the exercise spend some time exploring the area of transition from stun draw to regular draw. It’s very common to hit a series of beautifully controlled stun draws with each shot beating the previous one by a fraction of an inch, and then sucking the cue ball back three feet with the first normal draw shot. You can experiment with the area on the cue ball around a tip width’s distance from the bottom to refine your control, along with variations in speed and acceleration. Throughout the exercise you will find that draw is very responsive to the subtlest changes.

This exercise is the one I share most often to help students gain control over the draw shot. Although it may be a little rough going at first, you will find that it produces positive results very quickly. And finally, it’s a great exercise to practice with another player where it becomes a game of competition for high score. In any setting this little exercise will give you control over the draw shot and the confidence to deliver precise draw shots under pressure.