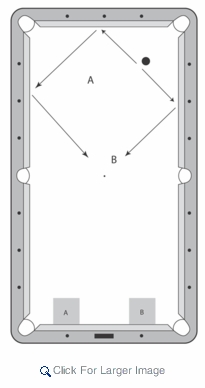 When we observe someone playing great pool and making the game look easy, we should try and determine why everything looks so effortless and natural. Often the reason is that great players know how to make easy choices. Because a typical pool game offers so many options and possibilities, great players must find a way to organize each layout into familiar patterns that allow them to run out the rack in spite of each layout’s uniqueness. I believe that we are constantly feeding what we face in the present into a bank of memories in order fit the current problem into a template for solving it. Sometimes however, despite our experience, we look at a shot without a crystal-clear picture of what comes next, perhaps because the position we need is too difficult or even impossible to attain. In those cases we fall back on certain strategies that offer the best probability of continuing the run.

Occasionally in a pool game, more frequently in ones that offer shot selection such as eight ball or straight pool, even the best players may not know exactly how to play the next shot or even which ball to shoot next. When you find yourself uncertain about the next shot, the best course of action is to maximize your chances by getting the cue ball to a place on the table that offers the most options and the highest probability of a good shot to play next. In most situations that place is the center of the table.

After you are satisfied with your feel for the center of the table on the one-rail shot, move the cue ball to position B for the two-rail shot. For this shot you will employ the same punch stroke and will add a touch of running english to the cue ball, in this case a half tip or less of left. Do not try to spin the cue ball to the center of the table with excessive english. You only need enough to get the cue ball out of the corner with a natural roll. Allow yourself a six-inch range around the center spot for both shots. Keep practicing however and soon you will amaze yourself with your ability to hit the center spot with precision.

Focus more on hitting the line than on your speed. In other words, a cue ball that rolls over the center spot or lands on the line just short of it is preferable to one than stops near the center but is completely off of the line. You will see why as you proceed with the exercise. Set up both shots again and hit them with enough speed to roll over the center spot and into the labeled, shaded areas for position on end-rail balls. Here now is one of the game’s most powerful principles. A cue ball rebounding from a rail and rolling over the center spot cannot scratch. When you can combine this knowledge with a confident feel for the center of the table you will experience the freedom to play two, three, and four-rail position shots with no fear of scratching.