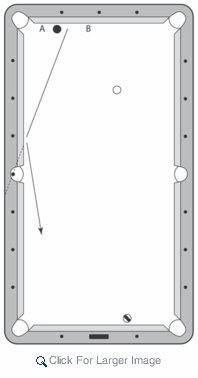 Sometimes it seems that the more we learn about pool the more we see that we do not know. And when we realize that all those mysteries arrive within the boundaries of a simple rectangle where we see everything, it may sound crazy to hear about employing something we cannot see. A normal, six-pocket table, the only kind I’ve seen despite the rumors I’ve heard of other varieties, has eighteen diamonds that we can see. If you look at the table in the diagram you will see that I’ve added a 19th diamond next to the left side pocket. The table that I use for my diagrams, with its unrealistic pocket cuts on the playing surface, kindly gives me some space on the rail to insert the new diamond. On a typical real table, that diamond would have to float over the pocket in midair to exist, which is one good reason we never see it.

The diagram also shows a very common but deceptively tricky shot to pocket the 8 ball and move down table along the side rail for a shot on the 9 ball. As we know from sad experience, there are two major problems lurking on this shot, the lower left corner waiting like a sewer for the cue ball, or that devilish side pocket, which sometimes delivers the knockout punch of a scratch from an impossible angle, but is usually content merely to taunt us with a little bump from its point to send the cue ball to the center of the table for hopeless position. Enough experience with either disaster can condition us to approach the shot from an avoidance standpoint that too often leads to one outcome or the other.

Eventually we learn to shoot the cue ball to hit the side rail somewhere in front of the side pocket to avoid both problems. But such vague thinking can yield bad position if the cue ball hits the side rail too soon. To solve all problems, and to play the shot proactively instead of fearfully, we must play to shoot through the nonexistent diamond. Doing so gives us a definite target to hit while it removes the corner-pocket scratch and any side-pocket interference as well as the likelihood of bad position.

After you become confident with the shot in the diagram you can alter the setup to try new angles. Place the 8 ball along the rail at various points between A and B to experiment with different angles. As the 8 ball moves toward B, making the cut angle thinner, you will need to add some left-hand english to move the cue ball to the desired track. You should observe that when shooting through the unseen diamond along the steeper angle from B, the cue ball hits the rail closer to the side pocket but still leaves a comfortable margin for error. As the 8 ball moves closer to the corner pocket and the shot becomes straighter, you may have to add some stun to the stroke to prevent the cue ball from hitting the side rail too soon and following out of the corner toward the wrong side of the table.

With so many challenges on a pool table that we can see, it may seem odd to start thinking about imaginary targets. But that invisible diamond does exist. Any non-believers can look a billiard table to see it. Once you acknowledge its presence, you will find that shooting for it gives you a definite target and makes shots of this type easy to play successfully.