Spot On The Wall 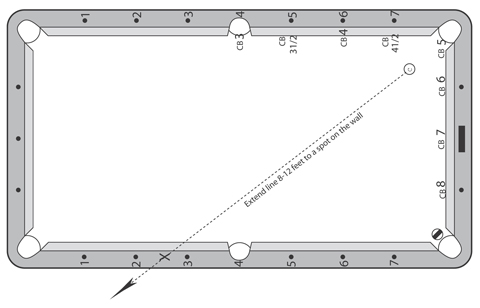 A thorough pool education always includes a series of systems that we can employ to address various types of kick shots. Most of the systems use the diamonds to give us a method for determining a target on the first rail that will lead to a successful execution of the shot. Many of those systems come to pool from 3-cushion billiards, including the corner-5 system, which is the most widely used system in that game. In fact, anyone who has seen the 1950’s Disney cartoon, Donald In Mathmagic Land, has also seen Charlie Peterson trying to teach the corner-5 system to Donald Duck. When you see Donald attempting the calculations you will get a pretty good idea of the way I looked when I first started playing tournament 3-cushion.

The corner-5 is so widely known and used that when someone refers to The Diamond System, chances are very strong that person is talking about the corner-5. Many editions of the BCA rulebook include a section toward the back with a brief rundown on the corner-5 system, introducing it as The Diamond System with a drawing that shows the three-rail, cue-ball tracks for a variety of first-rail hits, according to the system. However, the biggest problem with most presentations and drawings is the fact that pool tables don’t read those books and most tables do not play on system. And when we find ourselves on a table that doesn’t want to conform to the pretty pictures, the system is useless unless we have a method for adjusting it.

In the diagram we see sets of numbers going around the table to identify first-rail, third-rail and cue-ball numbers. First we determine a number for the cue ball’s location based on the corner from which the player shoots, which is 5. Going away from the corner along the bottom short rail the cue-ball diamonds are numbered 6,7, and 8. Moving away from the corner on the long rail the diamond numbers are 4 1/2, 4, 31/2, 3 and so on up the rail. Then we look to the first and third rails that the cue ball will hit, where the diamonds have whole numbers starting with 0 in the far corners on both rails. After you determine the cue-ball position, you subtract from it the spot that you want to hit on the third rail to give you the spot that you need to hit on the first rail. Shooting from 5 to 3 on the first rail gives you 2 on the third rail, which, if you’re using a table that plays on system, will go to the opposite corner, and pocket the striped ball in the diagram. If you shot from 61/2 to 21/4 on the first rail, the cue ball would hit 41/4 on the third rail. The cue ball’s number minus the number you hit on the first rail equals the number the cue ball hits on the third rail. CB-1R=3R. Most pool tables do not play on system but are usually off by some degree, maybe a half-diamond, three-quarters of a diamond or any possible fraction, sometimes playing as much as two diamonds short or long. In those cases we must allow for the difference in our calculations. The system works very accurately but involves a committed effort and a period of struggle to learn it.

Fortunately, we have the spot-on-the-wall system to replace the math and eliminate the need for numerical adjustments to accommodate the table. To use this system place the cue ball in front of one corner and an object ball in the opposite corner as shown in the diagram. Without any regard for diamonds or numbers, find the spot on the first rail—let’s say it’s X—that works to go three rails and pocket the object ball with a half tip of high and a tip of running english, right-hand english for the shot in the diagram. Test it a few times to confirm the hit on the first rail and the consistency of your stroke. Now extend a line from the cue ball’s corner through that spot on the first rail and connect it with something in the room eight to twelve feet beyond the table to find your “spot on the wall.” It can be anything, a light switch, a chair slat, a table edge, or any stationary object you see on that line. Confirm its reliability by placing the cue ball in front of the corner again and, instead of aiming at the rail, aiming at your spot on the wall. The cue ball should go three rails again to pocket the object ball. Now you can move the cue ball around the table to try the same three-rail kick shot from various positions. Each time you move the cue ball, make a line from it to your spot on the wall and hit the first rail where that line meets it. If your spot is good and your stroke consistent, you will make the three-rail kick, as if magically, from any position within the shot’s range with no need for numbers or calculations. I don’t know who first came up with this idea but it’s one of my favorite illustrations of sheer ingenuity. Even Donald would have learned spot on the wall in a matter of minutes.

For a visual demonstration of the spot-on-the-wall method for corner-5 shots as well as some one and two-rail kicks, watch the following video that Dr. Dave Alciatore and I made for this system.