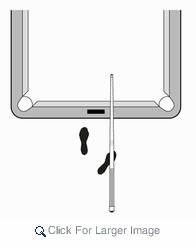 Few things are more enjoyable for me than watching a WPBA event. Every tournament brings out new talent while the overall level of play rises continually and steeply. Any girl out there will tell you that there’s no longer such a thing as an easy match—for anyone at any time—and it’s been that way now for about two years. After attending the U.S. Open in October I returned more impressed than ever with two of my favorite pool players, Karen Corr and Allison Fisher. They still exert their dominance over the rest of the field, an increasingly impressive feat considering the range and level of talent throughout the ranks coming from every corner of the world. I’ve always asserted, and was vindicated in a conversation with Allison after she won this year’s event, that such consistent dominance emerges from their steadfast commitment to sound fundamentals.

In this space last month we discussed perfect alignment and exactly how it looks. To summarize, we have perfect alignment when the front part of the forward foot, the hand, wrist, elbow, shoulder and cue are on one line—the line of the shot. Along with that we must land over the cue with our eyes in the exact same position every time. We may have the stick under the chin or under one eye. Without opening a big discussion about the dominant eye we can say that its precise position is not important as long as it never changes from shot to shot. Extremely critical however is that the line connecting both eyes is parallel to the table. Our binocular vision begins to break down whenever the head tilts to one side or the other. The best way to work on getting the eyes in line consistently is to practice making your stance in a mirror, until it lands exactly as you want it every time with no more need for adjustment.

Now that we understand and can duplicate perfect alignment, we need a way to place it on the line of the shot. Here is the area where perhaps every person who has ever played the game must make a conscious effort to change. Although pool is often compared to some of the other games that we play with sticks and balls such as baseball,and most often, golf, the billiard games distinguish themselves from all the others very sharply. In billiards there’s more than one ball.

The relationship that we must cultivate in order to sharpen our shot making skills is the one we form with the object ball. Despite the critical importance of that relationship, most experienced players remain attached to the cue ball throughout their playing lives. While that attachment to the cue ball is logical, growing from an initial concern for hitting it with the stick when we first start playing, it is precisely that attachment which keeps more players from real improvement than maybe any other problem we might have in our games.

In order to break that attachment to the cue ball in favor of relating directly to the object ball we must learn to make the stance in a way that puts our alignment precisely onto the shot. Stand at one end of the table and place an object ball out past the side pockets for a long shot. With only that ball on the table, practice making your stance with an imaginary cue ball that would be in place for a long, straight shot on your object ball. Now, while standing tall and still behind your imaginary cue ball, look at the object ball until you form a connection to it. Once that connection is formed in a moment of stillness, you can proceed to make the stance.

The process of forming the stance is the key to consistent shot making. With your eyes fixed on the object ball begin the process of stepping forward with both feet, right (rear) foot first, into the stance without taking your eyes off of the object ball. While stepping forward with the right foot, note the front of that foot landing on the line of the shot as shown in the same diagram we used last month to illustrate alignment. What you’re looking for is the ability to make the connection to the object ball and maintain it throughout the process of making the stance. So, as soon as you land in your stance, with your eyes on the object ball, do you still feel that connection to the ball? If you threw your stick would it hit that ball dead center and knock it in? Do not look for the connection after you’re down or attempt to reclaim it if it disappeared. You must feel it the second that the stance is completed. If it has vanished, as it sometimes does in the process, you must stand up and then make a new stance from the beginning. After working through this process with an imaginary cue ball for about 15 minutes and strengthening your connection to the object ball, you may put the cue ball on the table.

Place the cue ball where it was in your imagination and do everything that you were doing in exactly the same way. In fact, you’re going to shoot the shots now without looking at the cue ball. To break any connection to it you must shoot some balls in without even glancing at the cue ball. It may sound strange but the cue ball’s role in shot making is really meaningless. It’s merely something that gets in the way between our perfect alignment and the target ball. If we were throwing the cue ball at the object ball rather than hitting it with a stick, the thought of trying to look at it would never occur to us.

The process of placing our alignment onto the shot begins in the pre shot routine, specifically in the moment where we form the connection to the object ball. From there, proceed into the stance, stepping forward and placing the front part of the rear foot onto the line of the shot without taking your eyes off the object ball. If you still feel the connection the moment you land, shoot the shot without looking at the cue ball. When you master this process, you will have left behind the common method of getting down and then aiming the shot in favor of the professional method of aiming the shot and then getting down. Pay attention to Allison Fisher and Karen Corr and the conspicuous care they take with every shot in this manner. Next month we will introduce the act of looking at the cue ball into the routine to complete this phase of the instruction.