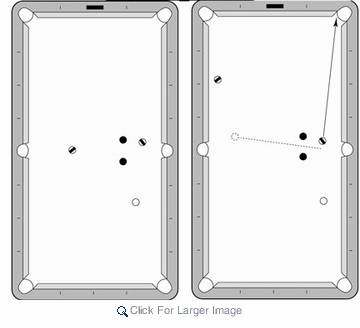 When I compare pool players to other athletes I notice a greater variety among the competitors than I see in any other sport. Since size and strength offer no particular advantage and the game places no great physical demands on its participants, we see competitors in all shapes and sizes. And when we throw in the fact that the greatest players now come from every corner of the globe, we might say that pool players comprise the world’s most diverse sporting community. But, despite all the variability throughout the ranks, a few qualities shine brightly and consistently in every great player. Chief among those is a keen mastery of the stop shot.

In the first drawing we see a classic example of the power that the stop shot offers. Before shooting the striped ball into the upper right corner, a trained player would walk over to the right side pocket to look at the space between the two solid balls and note how it lines up for a shot on the next stripe into the left side pocket. In this case a stop shot leaves the cue ball in perfect position to shoot through that space and pocket the next stripe. Any player who has devoted enough practice to mastering the stop shot can play the shot with a confident knowledge of exactly where the cue ball will land with no need to consider those potentially obstructing solids. No other shot approaches the combination of precision and confidence that we attain with the stop shot.

When my students first begin working to master the stop shot they have to listen to my incessant ramblings on the importance of being able to execute a given stop shot at all speeds. But when we look at the first drawing we see no indication of speed or its importance; a stop shot at any speed would leave the cue ball in the same spot. So, why would a player need a variety of speeds for that shot instead of playing it at the most comfortable speed? For the answer we must look at the second drawing. Here we have an almost identical shot save one major difference. Instead of a straight-in shot on that first stripe, the cue ball is closer to the side rail from where we must cut that striped ball slightly right to pocket it. Also, we notice that next stripe is positioned for a shot in the upper left corner instead of the side pocket.

Astute players all know that it is impossible to cut an object ball and stop the cue ball, a result that’s only achievable with straight-in shots where we can transfer all of the cue ball’s energy to the object ball and therefore stop the cue ball dead upon contact. However, even though we cannot stop the cue ball on the shot in the second diagram, it’s important to know that we can still play a stop shot. And, while the cue ball will not stop because of the cut angle, it will track reliably along the dotted line, perpendicular to the stripe ball’s path into the pocket. That line is typically called the tangent line, a name that I don’t like since a sphere has an infinite number of lines tangent to it. Call it what you wish but remember that only a stop shot will hold the cue ball on that line. Because of that principle I like to refer to the perpendicular track as the “stop-shot line.” So, although we do not know exactly where the cue ball will come to rest when we’re cutting the object ball with a stop shot, we do know its exact track and can move between those two solids confidently as if they weren’t there.

Recreate both diagrams and practice hitting perfect stop shots until you are executing the two shots with precision and confidence. From there you can experiment with other setups that call for stop shots at varying speeds. Soon, shots like these will no longer appear demanding but will begin to occur as familiar and easy. Then, with knowledge of the perpendicular track in mind, watch some professional matches and note how frequently the best players employ the stop shot. Though the players themselves may be vastly different from one another, they’re sure to share a strong allegiance to the most dependable position shot in pool.