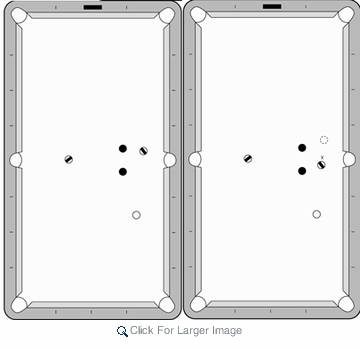 Sometimes it seems that the more we play pool the more we learn that there’s too much to learn. To beginners or the otherwise uninitiated, I know that the game looks simple, an assessment often reinforced when watching professionals who can sometimes make things look too easy to be interesting. Then, we get out there and try it, only to find ourselves lost in a sea of complexity. But isn’t that what we love most about pool, the fact that the learning never ends? At some point in my own education I decided that there really is too much to know and that one person can never learn all of the game’s possibilities in one lifetime. Yet, we know that there are ways to manage unfamiliar layouts and position patterns that arise infrequently because we witness great players solving the same problems that often stump us.

Because a pool player can play for fifty years without ever seeing the same, exact layout twice, there really is no way to learn every possibility that confronts us on the table. Still, we need ways to make the strange seem familiar in order to address the vast array of problems confidently. In the matter of position play, where we are often forced to move the cue ball onto precise tracks for success, we must find ways to shrink the daunting range of choices into something more manageable, especially under pressure. So, rather than trying to learn and master every possibility, instead we need only to master a small set of references that serve to get the job done in most situations with only minor adjustment.

In the first diagram we see a shot from last month where a straightforward stop shot leaves the cue ball in perfect position to go between the two solids for an easy shot on the next striped ball. It’s a shot that comes up occasionally and one that pays off handsomely for time spent practicing the stop shot. Unfortunately however, the balls do not always lie in such neat little arrangements waiting for us to pick them off with simple techniques. A more realistic layout can be found in the second diagram where a stop shot leaves the cue ball snookered behind the bottom solid ball. For the run out we must move the cue ball forward very precisely to the X for a shot between the two solids, a potentially scary prospect, especially under pressure.

Last month we talked about the importance of mastering the stop shot and looked at examples where the stop shot leads to perfect position and an easy run out. That is not the case however with our new shot, which requires moving the cue ball precisely into position. But, even though a stop shot will not work for position, we shall employ it as a reference to get the necessary position. Set up the shot as shown and shoot stop shots with medium-firm speed, hitting the cue ball just below center. Shoot them until the cue ball is stopping perfectly dead in that spot behind the bottom solid ball five times in a row reliably. Now it’s time to stun the cue ball forward to the X.

Set up the shot exactly as shown and prepare to shoot the same stop shot that you have been playing. Before shooting however, move your tip up slightly higher on the cue ball, perhaps an eighth of an inch. Then shoot the shot with the same speed and punch stroke that worked to stop the cue ball previously. In this case, if everything is the same as it was for the stop shot, the slightly higher hit on the cue ball should work to slide it forward into position. It’s not an easy shot but shooting it in this manner makes it as easy as possible. Instead of pulling the position out of thin air and creating it from something unknown, we make a small adjustment to something we know very well, the stop shot. When we can address a shot knowing exactly where to hit the cue ball for a stop shot at a given speed, stunning the cue ball forward is a simple matter of making a small adjustment upward with the tip and then proceeding with the same stroke that works to stop the cue ball. To stun the cue ball backwards a few inches you will employ the same technique except with a downward tip adjustment this time. Move the object ball to the place shown with the dotted-outlined ball and try the same shot with a backward stun to the X.

Practice both shots in the context of making an adjustment to the stop shot and observe how quickly you can refine your feel for exact cue-ball placement. Here is the first and most powerful example of one reference shot that we master and then employ with only small adjustments to manage a variety of position demands.