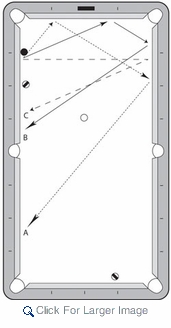 Though I’m not exactly sure why, balls frozen to the rail present a daunting challenge to beginners. Eventually however, most players get comfortable enough with them to shoot them confidently from just about any possible angle. But then, long after we gain the necessary confidence to pocket frozen rail shots, they can continue to nag us with one of pool’s most subtle position challenges—whether to play the shot ball first or rail first. And the difference in aiming the two shots is so slight that we must dedicate focused practice to learn the separation so that we can apply either technique when required.

In the diagram we have one shot set up with the solid ball frozen to the cushion and a 45-degree cut angle, which allows us to move the cue ball to many different places around the table. For our purposes however we only need to concern ourselves with three different position tracks to one of the striped balls on the table. In every case we will use right-hand, or inside, english to make the cue ball run along the indicated paths. And, although we will vary the stroke and tip placement for each shot, the most operative variable will be how the cue ball strikes the object ball—rail first or ball first.

The first shot, A, comes up frequently in 9 ball and requires moving the cue ball three rails around the table to the near end for a shot on the striped ball lying on the bottom rail. Here, in order to hit the second rail as quickly as possible to move the cue ball on a track that’s long enough to get to other end of the table, it must hit the edge of the solid ball before it hits the rail so it can rebound from the cushion with the right-hand english spinning it to widen its track for the trip around the table. Also, since we want the cue ball moving forward after striking the object ball, we must hit it high with a smooth follow stroke. Hitting the rail first or applying a punch stroke will cause the cue ball to rebound toward the corner pocket across the table instead of dropping down immediately to the second rail as shown with the dotted line. Nailing down the desired, ball-first hit may take some practice. Moving the cue ball toward the left rail to straighten the cut angle offers a bigger target on the object ball to acquire a feel for the ball-first hit.

The second shot, B, uses another three-rail path with running english for position except that it’s a much shorter track to the striped ball lying one diamond down table from the object ball on the same rail. Hitting the shorter track will require a rail-first hit slightly in front of the object ball. After the cue ball hits the rail it rebounds from the object ball, initially straight across the table before the topspin moves it forward to the short rail near the opposite corner for the shorter track along the solid lines. Because scratching across corner is always a danger on this shot it’s important to practice maximizing every variable—the follow stroke, the high hit and the right-hand english to ensure against that disaster.

For the third shot, C, we will employ a somewhat uncommon technique for position on the same striped ball from the previous shot in a situation where the three-rail track might be blocked around the short rail. It’s another rail-first shot with right hand english, the same basic shot as B really but without the second rail. To move the cue ball straight across the table, as indicated by the dashed line, we must apply some draw with the right hand english to keep the cue ball from dropping down to the short rail. At the second rail, the right-hand english will grab it and spin the cue ball toward the side pocket and across the table for position on the next ball. Practice the rail-first hit as close as possible to the object ball to ensure the perpendicular rebound from the first cushion. The shot also requires a punch stroke, which will not spin the cue ball as well as the follow stroke, meaning that it’s likely to require hitting farther to the right of center on the cue ball for the necessary spin to move it out from the second rail. Though it’s not really a difficult shot, it is different and may therefore require a little more practice until it feels familiar.

With these three shots we see how very subtle changes can cause wide variations in result. The difference between the rail-first and ball-first hit is almost too slight to observe but it’s there and must become part of everyone’s game. Because of the english, deflection will play a strong role in aiming these shots and may lead to over cutting or possibly missing the object ball completely at first. So be patient with the aiming as you incorporate the critical distinction between ball-first and rail-first into your game.