Rail Shot with Inside English - August 2007 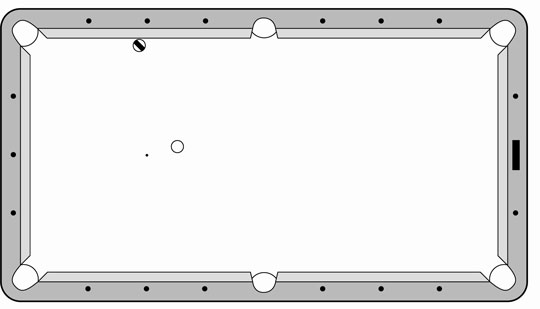 When and How to Complete a Rail First Shot

No discussion about english is complete without addressing its complexity and the problems associated with its use. And after enough talk about deflection, curve and throw, we can easily become too crippled with fear to pick up a cue. Because of the difficulty that english adds to a shot, many top players advise us to play center ball whenever possible to avoid threatening the shot and to help ensure pocketing the ball. Occasionally however, we encounter shots where introducing english can make pocketing the ball far easier than it would it be with no english.

We see a shot with the striped ball frozen to the cushion and the cue ball positioned where the cut angle approaches 90 degrees. Because cutting that ball directly into the corner appears so difficult, many players would opt for the low-percentage bank across corner. But we have a proven technique that employs english to make cutting that shot along the rail and into the corner a relatively easy shot.

Play the shot with center, maximum left english, striking the cue ball at 9 O’clock, with a smooth, languid stroke and manageable speed. Many players hit the shot too hard, which adds unnecessary difficulty. Think about hitting it smoothly and keeping your tip on the cue ball through the stroke. Because deflection can make aiming this shot a little tricky, it may take a few attempts to get comfortable with the new technique. It shouldn’t take long though to catch on to this trick, and you will be pocketing that ball consistently within ten minutes of your first attempt. This method also works for balls that are not frozen to the cushion by varying the distance from the object ball that the cue ball meets the cushion. And, as far fetched as it sounds, this method can work to make a rail shot where the cut angle exceeds 90 degrees.

After you get comfortable with the shot in the diagram be sure to set it up on another rail to practice cutting a ball to your right with right-hand english. Also, you should experiment with various cut angles and distances to try all of the possible variations we can encounter for this shot. And, with a new knowledge of english, you now have a new skill that transforms a previously scary shot into a piece of cake that you can greet with calm confidence