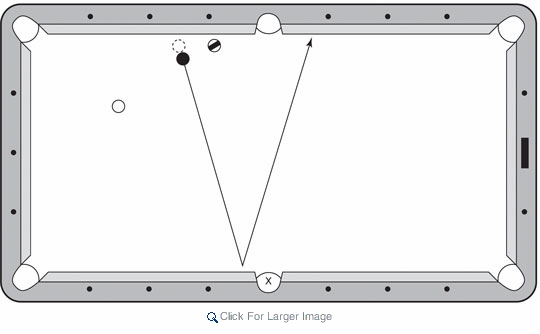 People who ask me what’s so great about pool soon regret doing so as I will invariably begin listing the game’s features ad nauseam. When the smarter ones ask me for the one feature that sets pool apart from the other leisure sports, the answer is always safety. To elaborate I explain that if I go golfing or bowling with someone and that person’s kicking my butt, I have to stand by helplessly and watch it happen. But if we play pool, I have the power to determine what my opponent gets to shoot at. The late Danny McGoorty summed it up best when he said that he tried golf once but didn’t see the point when he saw that he couldn’t snooker the other guy on the green.

In the diagram we see a common 9-ball situation where we have to shoot at the solid ball with no good shot. The 9 blocks both the straight shot to the far corner and any bank, either across side or across corner. Playing the combination on the 9 would be a difficult and foolish choice that would lead to a loss far more often than not. Along with no good offensive shot, this setup also prohibits a good safety shot with a direct hit on the solid ball.

There is however an effective and easy safety as shown in the diagram. To play the shot as shown you will hit the cushion first to strike the solid ball from behind and send it twice across the table while the cue ball stays in place where we see the dashed outlined ball in the diagram.

In order to make this shot work you will have to coordinate two important variables. First, after hitting the cushion the cue ball must hit the solid ball straight on in order to transfer all of its energy and stop in place. If the cue ball rolls too far right and into the 9 ball, then you must move your aim point slightly left on the cushion. You may note however that a little cue ball movement to the right can enhance the power of this safety by freezing the cue ball on the 9 ball. If the cue ball glances off the left side of the solid ball to move too far away from the cushion you will need to move your aim point on the cushion slightly right. The correct aim point is not something we tend to see naturally, so the shot requires a little practice to stick the cue ball consistently. The second factor is correct speed, which tends to come pretty quickly for most shooters. Practice the shot until the solid ball is returning to the top, side rail consistently.

The shot also comes with an occasional two-way possibility that we should recognize when it’s present. If the solid ball were the 8 ball you would have the option of playing it once across the table into the side pocket marked with the X. Make the shot and you have great position for a shot on the 9 ball. Miss it with good speed and you leave your opponent safe.

One interesting aspect of this shot is that it works with both draw and follow on the cue ball. When the cue ball is close to the target ball, as it is in the diagram, I use draw to hold it in place. When I employ this technique over a long distance, a shot that’s commonly used to move a ball away from the opponent’s pocket in the game of one pocket, I use a high ball, mostly because drawing a cue over a long distance requires too much speed. In either case however, I always use a little English away from the object ball, which helps hold the cue ball in place. For the shot we see in the diagram, I would use a touch of left-hand English with dra

For a high-speed video demonstration of a cue ball rebounding with follow, stun and draw, click on the following link to a video that I shot with Dr. Dave Alciatore, an engineering professor at Colorado State University.

The video clearly shows that a cue ball with follow or draw leaves the rail with stun, which will hold it in place after a full hit on an object ball in the slide zone. Note that a cue ball stunned into the cushion picks up forward roll immediately after leaving the cushion. Note also how the cue ball behaves with slick conditions and that one with draw picks up forward roll very quickly. So, on brand new cloth, it’s possible that only follow will work for this shot. Under all conditions or changing conditions it’s a good idea to experiment with a few different setups to determine what makes the cue ball leave the cushion with stun and how far it will slide before it begins to roll.

Here we see only one example of a very useful and effective safety technique that I call a short kick. Learn the shot in the diagram and then try varying the setup to see how many variations of this powerful shot you can add to your arsenal.