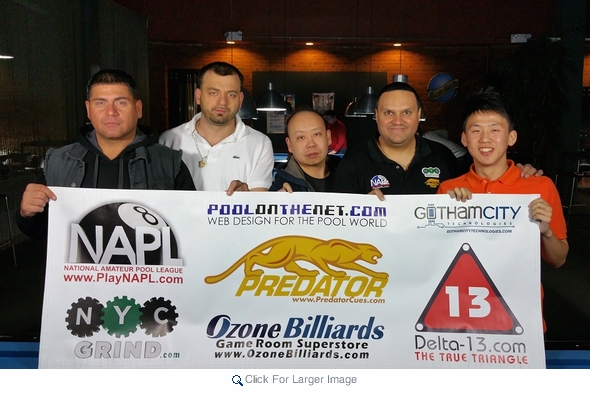 The Predator Pro/Am Tour held its Open/Pro 10-Ball division at noon on Sunday, November 9th in Bayside, NY at CuBar. Ten entrants came out to face-off on Stop # 24 for their chance at $1,200 in prize money. New Jersey-based player Spanky Kaba came back from the loss side to down Frankie Hernandez in the finals.

Kaba started out strong defeating Mhet Vergara (7-2) then proceeded to defeat Elvis Rodriguez (7-1), before losing to Ray Lee in a hill-hill match (7-6). Lee had previously defeated tour owner Tony Robles in his opening (7-5). Pushing forward, Lee would then move on to the final of the winner’s bracket, where he would be met by tour veteran Frankie Hernandez. Hernandez would ultimately take the match on the winner’s side against Lee with a final score of (7-3).

The one- loss side saw, Kaba make his comeback, as he defeated Lee Kang (7-5) to move ahead into the quarterfinal to face Robles. Robles, after being dealt an early loss showed much fortitude making his way through the one-loss bracket vanquishing Eugene Ok (7-1) and Hunter Lombardo (7-3).

However, Robles would be delivered a stunning loss in the quarterfinal by Kaba who would knock Robles out with a final score of (7-1). Kaba would get another shot at Lee in the semifinals, turning the tables and defeating Lee with another very close match ending (7-6). The final round would see Kaba and Hernandez face off yet again. Following the same route as before, Kaba would prevail in a hill-hill battle, walking away with a (7-6) win for his first Predator title, in his first tour appearance of 2014.