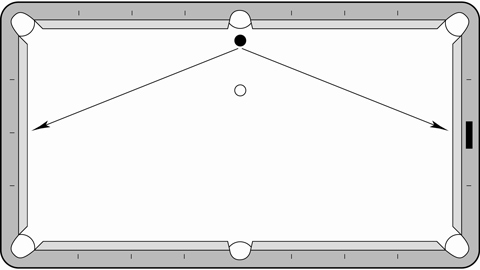 When we first begin playing pool, most of us apply all of our focus to the overwhelming concern of pocketing balls. Before long, the necessary hand-eye coordination takes hold and we gain proficiency with shot making. We learn to determine precisely where to hit each object ball in order to sink it as we become “wired” for hitting the spot on an object ball to make almost every shot we attempt, including some wildly difficult ones with considerable distance to the pocket.

As the distance an object ball must cover to reach the pocket increases, the margin for error around the exact spot to hit on that ball reduces sharply. And so it follows logically that as the distance between the object ball and the pocket decreases, the margin for error becomes larger. Even on a tight table, an object ball that’s very close to the pocket offers such a wide range of places to hit and still make the shot that some players find it difficult to choose the best spot on that ball to hit. Because, as beginners, we become accustomed to hitting a precise spot that a shot far from the pocket demands, we tend not to pay much attention to the easy, close in, shots. Somewhere in our education we must revisit with those shots to teach ourselves how to choose the best spot to hit on an object ball when we have options.

In the diagram we see a simple, yet powerful exercise that works to refine our draw and our ability to choose an exact spot to hit on an object ball when a range contact points will pocket the ball. Set up the shot as shown, with the object ball about four inches from the lip of the side pocket and centered between the pocket’s points. Place the cue ball about 12 inches back and mark the positions of both balls. Begin the exercise by exploring the pocket with no regard for the cue ball. Shoot some shots into the center of the pocket, the extreme edges and as many points as you can visualize inside of it. Before each shot, choose an exact dot in the pocket for the object ball to hit and then shoot it there. Most pool shots offer some wiggle room and the best players like to shoot for a dot in the pocket instead of aiming at a big, black hole in the rail. You will see that, for this close-in shot, the pocket offers a wide target for the object ball, and you can use this exercise to develop a habit of making exact choices for aiming.

After investigating the size of the pocket you can add cue-ball control to the exercise. Because we applied so much focus to pocketing more difficult shots as beginners, we are accustomed to identifying one spot to hit on an object ball and then accepting the range of position tracks that one spot offers. Here we have a shot where we can pocket the ball and literally cover the whole table with the cue ball. It’s possible to make the shot and hit every diamond on the table with the cue ball. However, at this stage, we’re going to confine the exercise to draw and all the targets between the two arrowheads.

Some of the best exercises are the simplest and this one is the best I’ve found for refining draw and learning precise aim together. Spend a little time with this exercise to give your aiming professional precision while you discover an amazing new skill for drawing into position, break outs and the occasional carom on the 9 ball for the game winner.