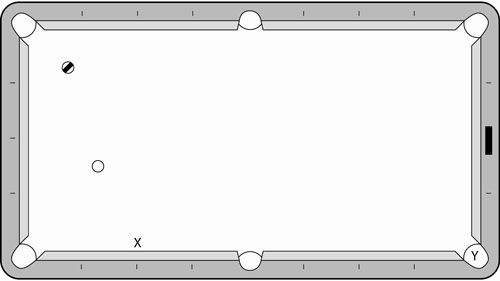 So far, our discussion of english has focused mainly on the problems we encounter when using it and then overcoming those problems to pocket balls. Now, we’re ready to explore its purpose and the reason we abide with the various difficulties that english brings to pool shots. In other words, it’s time to put our english skills to work for cue-ball control.

In the diagram we see a simple shot that we will use repeatedly to study english and develop a feel for precise cue-ball control with sidespin. Set up the balls as shown and then mark them so you can repeat the same shot each time as you work to move the cue ball through a range of destinations by varying english. I like to use loose-leaf reinforcement rings, but good old chalk on the cloth will do the trick just fine. If you’re practicing in a public room and using chalk to mark the balls’ positions, be sure to ask for a brush when you’re finished so you don’t have to leave a mess behind.

Begin by shooting the striped ball into the corner pocket with a high, center-ball hit and a smooth follow stroke. The follow shot with no english should track across the table to hit the near side rail close to the X. It doesn’t have to hit that diamond precisely but you do want it to hit the same spot consistently—at least three times in a row. Also, you want the cue ball to rebound from the second rail so that it comes to rest between a half diamond segment and a whole diamond segment (about five to ten inches) from the near side rail. You now have a reference position track with a reference speed.

Now it’s time to add english for precise position. Begin by adding just enough right-hand english to move the cue ball one diamond down the near side rail to your right. Then you will add slightly more english to move two diamonds to the right for a scratch in the near side pocket. Continue adding english and moving the cue ball along the side rail one diamond segment at a time until you can scratch in the corner marked Y. For every shot remember to use a smooth follow stroke. The follow stroke is used for most shots that employ english, mainly because it works to spin the cue ball better than a snappy punch stroke. Also, you want to find the precise speed needed for every shot to produce the reference rebound from the second rail—between one half and one whole diamond segment. And most important, before every shot, take a good look at your target before getting down, visualize the cue ball going to its precise destination, then forget the whole matter and just pocket the ball. The ability to choose precisely and then let go of position thoughts opens a clearing for pure execution.

Another way to move the cue ball progressively along the near side rail is to keep your tip on the vertical axis, no english in other words, and add a slight amount of snap or punch to the stroke for each successive position target. As we add punch to the stroke, the cue ball tracks wider off of the object ball and thus returns to spot farther right on the near side rail. Try the exercise in this way by feeling the precise, additional amount of punch needed to move the cue ball one diamond segment at a time to the right, along the rail. You may find that it’s easier to measure the english more precisely than the punch to achieve position but it’s important to work on your ability to hit your targets with both techniques. To complete the exercise you must set up the same shot on the other side of the table to sharpen your feel for moving the cue ball leftward, with english and then with center-ball punch. Your hard work will pay off as your sharper control leads to more victories.

Recently I discovered a great tool to speed up the process for learning english and give students the precise cue-ball control they seek in as little as half the normal time. It’s the Aramith Pro Cup Cue Ball, the red-spotted one we see now in many televised tournaments. Using it allows us to see the spin we’ve applied to the cue ball so we can learn to relate our feel to the desired results more quickly.