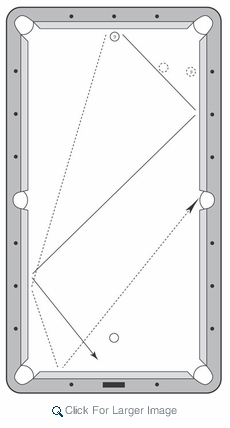 Whenever I demonstrate a safety for a group of students someone invariably rattles me by asking, “What do you do now?” I find the question unsettling for two reasons. One, since it only comes after a good safety, I’m always a little hurt by the fact that certain students want to skip so eagerly past admiring my work to learning the proper response. Some people, it seems, only care about their own needs. And two, I always want to say, “What are you asking me for? I’m the only person who will never have to reply to one of my safeties.”

Last month we discussed a very simple safety that’s designed to leave a shot like the one you see in the diagram. I know that the cue ball is frozen to the bottom rail in last month’s diagram but, remember, I’m not replying to my own handiwork. Seriously however, the safety from last month does not always get the cue ball to the bottom rail, and when it fails to do so, we have an option that most players initially deem too crazy.

When faced with the shot in the diagram the two obvious options are banking the 9 ball straight back to one of the bottom corners, or playing a safety with a soft, half-ball hit on the 9 to leave it and the cue ball on opposite side rails somewhere in the top half of the table. There are some problems with those two shots however. On a nine-foot table the bank is too difficult and almost a guaranteed sell out when missed. The best possible outcome on the safety is leaving the 9 ball about one diamond short of the side pocket with the cue ball around one diamond away from a top corner pocket for a shot that cannot be banked across side and is very difficult to cut into one of the bottom corners. That requires perfect speed and a perfect hit on the object ball. Without those elements in place that safety play can leave an easy bank, either cross side or cross corner, or a safety option that allows your opponent to easily return the balls to the positions we see them in now. The worst outcome leaves the 9 ball hanging in front of the side pocket, a result that only requires a shade too much speed.

So, with all of the dangers that those two options carry, why not try a seemingly outrageous offensive play with a built-in defensive element in case of a miss? In the diagram we see the 9 ball’s path represented by the dotted line and the cue ball’s route shown with the solid line. So, the shot is to bank the 9 ball three rails into the side pocket as shown in the diagram. What!!!?

Now, although we cannot expect to make it very often there’s a compelling argument with several good reasons for playing it. One, sometimes you will make the shot exactly as it’s diagrammed. But when you miss it with good speed the 9 ball banks off of the rail near the side pocket and returns to the top rail where it began. The cue ball meanwhile moves three rails along the path in the diagram back to its original position to leave the same shot for your opponent, who, unlike you, probably has not practiced this shot. To play the shot, bank the 9 ball wide toward the first diamond on the left rail with low, right-hand english on the cue ball. Because this shot requires a low hit to get the cue ball back to the bottom end of the table, it can only be played when the cue ball is far enough away from the rail to hit it low comfortably. Practice the shot until you find the speed to return the 9 ball back to the top rail and the cue ball back to the bottom rail. With a little further practice you should pocket the 9 ball in the side a few times.

There’s another reason to play this shot. Sometimes the shooter hits it badly and slops the 9 ball into the bottom corner pocket. In fact that’s how I learned this shot. A few years ago I was watching a tournament on TV where Buddy Hall fired the 9 ball straight back into the corner pocket to win the tournament. I was thoroughly impressed, both by his skill and his courage to play such a tough shot in a tournament final. During the interview he confessed that he was playing the three-rail shot in the diagram and he merely got lucky to make the 9 in the corner. He didn’t have to make that confession but I’m glad he did. Now we all know a new shot.