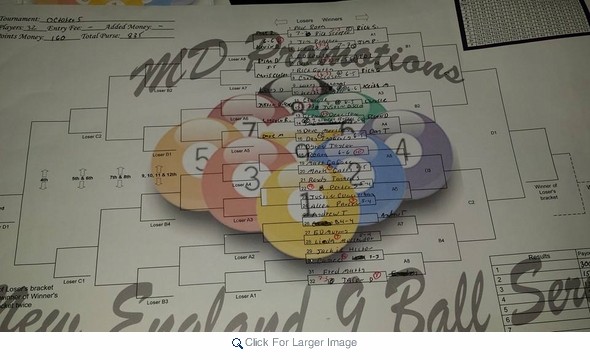 New England 9 Ball at Westgate Lanes New England 9 ball Series held its tournament at Westgate Lanes located in Brockton, MA. Twenty-four players came out to participate, for their chance at $735 in prize money. This event marks stop # 5 of the 2014 season. In the A division Paul Rota faced off against Fransisco Cabral in a (7-7) race with Rota finishing with a final score of (7-6). The event winner Roarke Dickson faced Tony Ruzzano in the B division in a (6-6) race with Dickerson defeating Ruzzano (6-3). Division C saw Tim King defeat Randy Gilbert (5-3) Pushing Gilbert over to the one-loss side. Eddie Murray faced Andrew Tankerley in the D division, where Tankerley shut down Murray (4-0). The quarter final matches saw Dickson defeat Jason D’Angelo (6-3) in a 6-5 race as well as Brian Dorphase defeating Deana Mills (6-2) in a 6-3 race.

The hot seat match saw Dickson and Dorphase battle it out in a 7-4 race with Dickson prevailing with a match score of 7-3 securing his spot in the finals. Meanwhile Tankerley went on a winning streak on the one loss side defeating Cameo Moy (4-2), Dana Mills (4-2), and D’Angelo (3-3). Tankerley final match would pair him back up against Brian Dorphase, the player who sent him over to the one loss side. Dorphase would go on to dominate Tankerley ending his win streak and clinching his position in the finals with a match score of (6-0).

The final match was Roarke Dickson against Brian Dorphase in a 7-4 race. This match had the same outcome as their winner’s side face off with Roarke taking a 7-3 victory over Brian and winning his first tournament of the season.

The next event will be the Don Clemons Memorial held November 9th, 2014 with $500 added at Busters Billiards in Somersworth, NH.