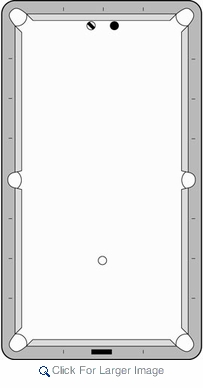 It seems that the deeper we delve into pool the more complex things become as we uncover and learn about so many new variables. The greatest source of complexity facing the billiards student is english and all the various effects its use introduces to the shot. Applying english to a shot affects both the cue ball’s path and the direction in which the object ball travels after contact, a set of variables that we must somehow predict and then compensate for to pocket a ball with english. This month we shall isolate the cue ball with a simple but effective exercise in order to hone our feel for ways that using english can influence the cue ball’s path. This is a good exercise to practice with a friend as you take turns resetting the balls for each other while comparing notes on your observed results.

First, we must agree on terminology and so I want to make it clear that when I refer to english on a cue ball, I’m talking about right or left-hand spin. I use the terms follow and draw to describe hitting a cue ball high or low, respectively. In the diagram we see a simple set up with the cue ball on the head spot and two object balls, a stripe and a solid, about 11/2 ball widths apart from each other on the foot rail. The distance between the two object balls can be adjusted to make it wider or narrower and will probably become narrower as you gain accuracy throughout the exercise.

As soon as the tip moves to the right or left of the cue ball’s center to apply sidespin, we encounter effects that send the cue ball off on a path different from the one on which it’s aimed. The first effect we observe is deflection, also called squirt. And then, in addition to the deflection, we may see a distinct curve in the cue ball’s travel. On any given shot with english, deflection and curve always act on the cue ball in opposite directions of each other, and we must know which one to take into account to adjust the aiming accordingly.

Whenever we apply sidespin, the cue ball initially deflects or squirts away from tip in the opposite direction. So, if you use right-hand english, your tip will push the cue ball off to the left as it leaves your cue. Naturally then, left-hand english makes the cue ball deflect to the right. How far it moves off line depends on several factors: the amount of english, speed, stroke, and equipment. Modern pool cues tend to deflect less than older ones, but in my experience, all cues deflect the cue ball to a degree, some just less than others. The second effect is curve, which takes over during the cue ball’s travel to move it in the same direction as the english used. Right makes a cue ball curve right, and left makes the cue ball curve left. The precise amount of curve to expect also depends on several factors: the amount of english used, speed, stroke and cue elevation. With those ideas in mind we can explore the effects of english on the cue ball.

Set up the balls as shown and, without english, shoot the cue ball between the two object balls a few times to acquaint yourself with the shot and tune your aiming. Now, you can begin experimenting. Set up the shot, aim between the two object balls with a tip of right-hand english and firm speed. Did the cue ball hit the striped ball? For this shot, with right and firm speed, we must contend with deflection, which will push the cue ball off line to the left. Set up the balls and try it again until you are hitting the space between them consistently. Depending on your cue, you may have to aim for a full hit on the solid ball to deflect the cue ball into the space. Then you can try the same shot with firm speed and a tip of left hand english until you’re adjusting your aim accordingly and hitting the space consistently. You will have to practice on both sides of the cue ball since learning right, for example, does not teach us left.

After the initial shot you can complete the experiment by changing other variables. Try one tip of english with slow speed to see what that does. You should observe a coinciding reduction in deflection as you reduce speed, with all other variables remaining the same. Now try more english, then less english. You will observe that deflection increases as your tip moves away from cue ball’s center with all other variables remaining equal. Which deflects more, a slow shot with two tips of english or a fast one with one tip? This exercise will serve you to answer that question. Finally, you can add various strokes to study their effects on the cue ball. While maintaining consistent speed and english, compare a snappy punch stroke to a smooth follow stroke that keeps the tip on the cue ball longer. You should find that, all other variables remaining equal, the punch stroke deflects the cue ball more than the follow stroke.

Just knowing about the complexity and difficulty that english introduces to a shot causes many beginners to shy away from its use or put off learning it until a later date when everything else feels more comfortable. That same respect for demon english turns up across the board among professionals as well. Top players know better than anyone how the slightest miscalculation with english can lead to disaster, and many pros use it very sparingly. The truth however is that nobody’s game is complete without English as many shots demand it for success. We must all learn how to use english and suffer the occasional mishaps that its use can cause. This exercise provides a great introduction without the heartbreak of missed shots. Next month we’ll explore curve.