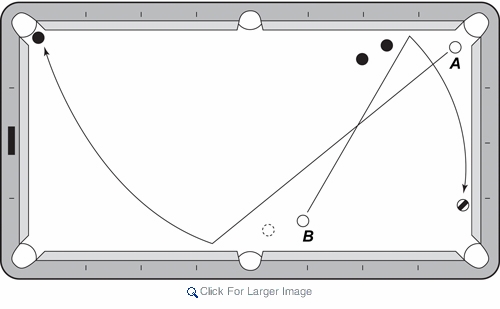 After learning a couple effective kicking systems most of us begin to look for two or three-rail kicks in those situations where we cannot shoot directly at the object ball. Intuition might suggest that one-rail kicks would be simplest, a logical guess that often fails for several reasons. One big reason that experienced players prefer multi-rail paths to hit hidden object balls is that all of the one-rail systems demand precise speed with a dead-center hit on the cue ball and a natural roll—no top or back spin. Failing to meet any of those requirements usually results in a departure from those pretty, mirror-image pictures we see in books and ball in hand for the other player.

If applying inadvertent spin can alter the cue ball’s path to cause a miss, then there must be situations where such alteration can be useful. One valuable technique for altering the cue ball’s travel is the application of draw to move the cue ball onto a tighter rebound track off of a cushion in cases where the natural path will not work or is unavailable.

In the diagram we have two shots and will begin with cue ball A, where the shooter wants to pocket the solid ball hanging in the top-right corner with a one-rail kick. For this setup, the mirror-image, one-rail path intersects the left, side pocket and is therefore not possible. One option would be to shoot the cue ball to the side rail, short of the side pocket, with some right-hand english to widen the rebound toward the far corner, a useful choice but not today’s topic. Instead we shall examine the more advanced choice of shooting past the side, with draw, to tighten the cue ball’s rebound and pocket the solid ball as shown, an uncommon technique among intermediate players since we do not intuitively think of draw causing the cue ball to curve. But look at the rebound from the first rail with a mental image of the cue ball spinning backward and imagine how that backspin can cause the curve shown in the diagram.

The best way to observe the phenomenon it is to play the shot and watch the results. Shoot the cue ball one diamond past the side pocket with straight draw—no right or left-hand english—until you are pocketing the object ball. Play it with a very low hit and a long follow through to ensure good backspin. Proper speed is critical on this shot, so hit it hard enough to maintain the spin after the rebound but soft enough to give the cue ball time to “grab” the cloth and curve. Using a striped ball instead of the cue ball will make the spin and its effect easy to observe. Practice shot A as a reference to develop a feel for hitting the corner pocket from one diamond past the side.

Another common example of a one-rail kick with draw is shown in shot B. Set the balls up as shown beginning with the solid-outlined cue ball. Nothing changes for shot B except maybe speed since the cue ball travels a shorter distance to the striped ball. It’s possible that applying draw to this kick shot makes the ball easier to pocket because the cue ball approaches the striped ball much closer to the straight-in line. After shooting it enough to develop a good feel, remove the solid balls obstructing the mirror-image line and compare success for ten shots on the shortened draw path to ten shots on the natural-roll, mirror-image path. Also, try the shot from the position of the dotted-outlined cue ball, which lies near the shot’s limit and will therefore require adding some left-hand english to the draw for maximum alteration to the natural rebound angle.

Because we most commonly associate sidespin with rebound angles we are not likely to consider the role that backspin plays in altering the cue ball’s path from a cushion. And since we do not expect such a result, we can miss a lot of kicks owing to inadvertent draw or slide on the cue ball. So here’s a twofold advantage where once there might have been a problem. We can learn to use this technique to our advantage when we face obstructions while maintaining an awareness of its somewhat odd effect to avoid misses on all kick shots.