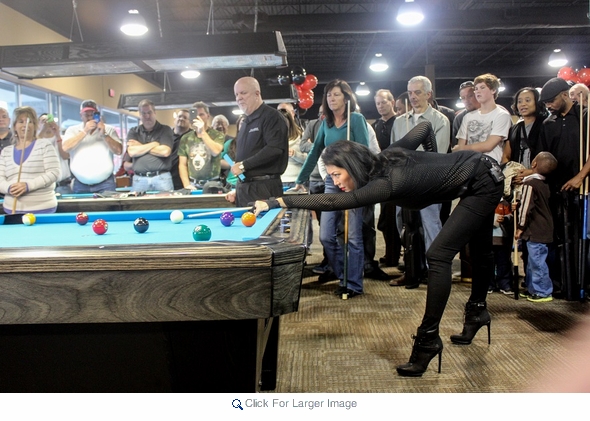 Atlanta, Georgia (November 8, 2014) – Jeanette Lee, known by many as “The Black Widow” visited Ozone Billiards’ newly opened retail store in Kennesaw, GA to promote and introduce her new cue line by Poison Billiards. The free event kicked off at 1:00 p.m. with over 200 people in attendance.

Lee took time to give the audience a little insight into her life as a world class pool player; discussing her battle with Scoliosis and the many physical challenges she overcame to pursue her pool career. Fans then had the opportunity to get up close and personal with the “Black Widow” herself. Lee accepted challenge matches, performed trick shots, and signed autographs.

For the next several hours of the event, raffle winners had an opportunity to challenge Lee to a game of 9-ball. Fans that defeated Lee were given a limited edition autographed glove available only through Lee. Fans who challenged Lee and were defeated received a consolation prize of their choice from products donated by Poison Cues. All attendees of the event were given an autographed photo of Lee and had a chance to take a picture with her.

Lee has become a legend in the billiards industry, winning more than 30 national and international titles. In only her first year as a professional, Lee reached the ranks of the top ten women in the WPBA (Women’s Professional Billiards Association). Amongst her many titles, she won a gold medal for the USA at the 2001 World Games in Akita, Japan and has served as a national spokesperson for The Scoliosis Foundation for over a decade.

About Ozone Billiards Ozone Billiards was started in 2001 by Shawn Gargano and his wife Ann-Marie. It began as an online family business that has expanded from 2 to 32 employees. Having kept the same principles by taking care of one customer at a time, its core values have never changed. Recently, Ozone Billiards just opened its first retail storefront in Kennesaw, GA. The 20,000 square foot facility is the largest of its kind. Not only containing products for billiard, darts, and gaming it houses a complete training academy for pool players to hone in their skills.