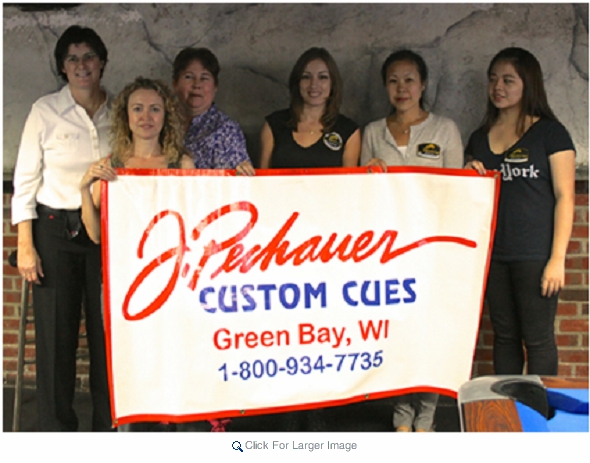 On the weekend of September 6-7, 2014, WPBA champion Karen Corr would capture her 5th win on the JPNEWT (J.Pechauer Northwest Women’s Tour) stop # 6. The $1,500-added event drew 18 entrants to Raxx Billiards in West Hempstead, NY. Corr would have to defeat a field of 18 to take the top spot; however, she would have to fight her way back from the One-loss side to claim the victory!

The Director Linda Haywood-Shea, would defeat Corr, putting her on the one-loss side early on in the tournament. Corr would have to continue to play a tough field of opponents to fight her way back from the one-loss side. Player’s such as Former WPBA pro Caroline Pao, who was shutout by Corr (7-0) and 2014 Japan Open champion visiting from Taiwan, Zhi-Ting Wu who would face Corr twice losing in the first round (7-1) and in the semifinal (7-5).

The final match would bring together Corr and Shea for a final race to nine. Shea having gone undefeated throughout the tournament would end up falling to Corr in the final match (9-4) with Corr having come back from an earlier loss from Shea to complete her fifth JPNEWT tour victory.