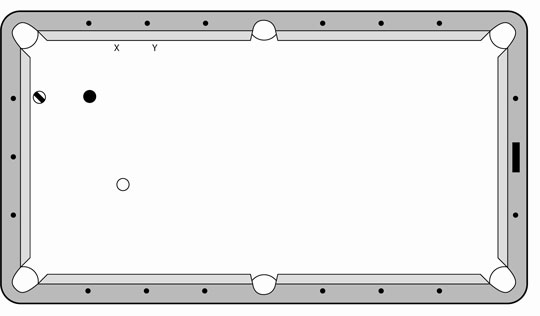 So far, throughout our study of english and its complexities, all of our position play with english has focused on using outside english, as in cutting a ball to the left with right. A good reason for that one-sidedness is that most of the shots we play with english will employ outside for position. Another reason is that inside english causes problems for many players, including some very good ones, and sometimes scares a few under pressure. However, even if it is true that shots with inside english are more difficult, when they do arise, we must execute or sit down. And, since it’s never productive to shoot fearfully, let’s take our first steps toward mastery with a simple shot to introduce the principles and inspire confidence with inside english.

In the diagram we see a setup with an easy shot on the 8 ball but possibly tricky position for the 9. While it may appear obvious that position will require some left-hand english to move the cue ball off of the top rail and over toward the 9 ball, the shot’s execution proves troublesome for a lot of players. However, once we break this shot down and uncover the challenges, success will come naturally, both today and whenever shots of this type arise in play.

Set up the shot on the 8 ball in the diagram and mark the balls’ positions. Even though we know where the 9 ball goes, let’s leave it off of the table for now so we can isolate the shot itself and distinguish the main position challenge. Begin shooting with no english and pocketing the 8 ball as your only objective. So, at this point, you have no concerns for the cue ball or where it ends up. Now that you’re comfortable pocketing the 8 ball, let’s experiment a bit with the cue ball. Again with no english, play the shot with a high-center cue ball and a smooth, lazy follow stroke. Your cue ball should hit the top rail near the X and begin to move across table slightly to your right since you’re not using english. Repeat that stroke a few times to let it sink in. Then, set up the shot again and hit it as you would a stop shot, that is with a below-center hit and a snappy punch stroke. Now of course the cue ball will track along the tangent line to hit the rail near the Y and then swing wide right to the other end of the table. Try it now with the punch stroke and a high hit on the cue ball. Even though the high hit with a punch stroke may not send the cue ball as far right as the Y, that snappy stroke will always track the cue ball too wide for the inside english to bring it back toward the 9 ball.

After observing the different outcomes from the two strokes, the secret to this inside-english shot should now be obvious, even before you begin playing it with english for position. The key to success with this shot lies in your ability to play it with a smooth, languid follow stroke that tracks the cue ball to the first rail near the X. From there a tip of left-hand english easily moves the cue ball toward the short rail and into position for the 9 ball. When 3-cushion billiard players coach the follow stroke, they say, “keep your tip on the cue ball.” That’s a good image to have in mind for success on this shot. Put the 9 ball on the table now and play the position shot a few times with a tip of left-hand english and a smooth follow stroke with a long follow through. Repeat the shot with those elements in place until success feels natural and automatic.

Another challenge that will arise on this shot is deflection or squirt. When you strike the cue ball with left-hand english your tip will push it initially to the right. If you are consistently over cutting the 8 ball into the short rail when you apply the left-hand english, that’s deflection at work. To compensate, you must aim to hit more 8 ball until you are making the shot. The amount of deflection you encounter will depend on your shaft and its deflection properties. All shafts deflect the cue ball with english, but some far less than others. Another factor with deflection is stroke. The smooth follow stroke that this shot calls for will deflect the cue ball less than a snappy punch stroke. Deflection always seems more prominent on shots played with inside english so spend some time experimenting with various strokes, speeds and degrees of english until you are pocketing the ball comfortably with inside english across a range of variables.

After learning that the key to this shot lies in the stroke, success becomes easy. The shot also illustrates a recurring setback in pool that arises whenever something appears as challenging. Any time we feel challenged, the natural response is tension. Unfortunately, a tense shooting hand delivers a jerky stroke that affects the cue ball much the same way as a punch stroke, which, for this month’s shot, produces a result exactly opposite of what we seek. So, when looking at this shot, remember to stay relaxed for a smooth follow stroke and easy position with inside english.