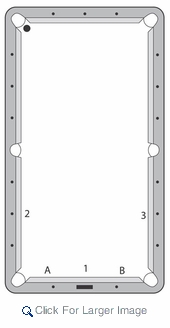 Pool players working to improve often overlook certain aspects of the game because they seem too simple to be a priority when there is so much to learn. Unfortunately some of the “simple” shots come back repeatedly to cause problems for the player who hasn’t spent time learning them. A good example of that phenomenon is a ball hanging near the pocket, particularly a corner pocket.

Even though a ball sitting in the jaws of a corner can consistently cause problems for many players very few will take time to practice and learn how best to play the shot. Maybe they don’t want to look silly practicing something so apparently easy. Problems with this shot originate early for most players when, after suffering discouragement from missing other more difficult shots, they greet the ball hanging in the corner so eagerly that they fail to consider how to hit it. In contrast to most pool shots where we’ve learned to hit the object ball precisely in order to sink it, the ball hanging in the pocket offers a wide range of contact points that will work to make the shot. And after we become “wired” to pocket balls by hitting a precise contact point for most shots, we must then learn how to manage shots that offer a range of points on the object ball.

You will begin practicing the shot with the cue ball near the bottom rail at the 1 and another object ball to play position for on the same rail at A. This setup calls for a thin hit on the solid ball and a naturally rolling cue ball with no left or right english to return it to the bottom right of the table for position on your next shot at A. The thin hit allows you to hit the cue ball somewhat softly but with enough speed to get it back down table. Practice the shot until you find the precise spot on the solid ball to return the cue ball consistently back down to the right the side rail near the 3 to eliminate the possible scratches. As you practice the shot you will learn to determine precise cue-ball tracks with subtle changes to the contact point on the solid ball.

When the next ball sits on the bottom rail at position B you need to play three-rail position. Hit the cue ball one half-tip above center with some right-hand english and the solid ball thin on its right side but not at the edge. Practice the shot until you are rolling the cue ball two rails through the center of the table to hit the bottom of the left side rail with proper speed for a shot on the ball at position B.

There are many more variations of hangers that can challenge us, and we have merely touched the surface in this discussion. Problems arise most often when the player looks ahead to a certain shot and dismisses it as easy rather than giving it proper consideration for its place in the run. Balls hanging in the pocket often merit longer consideration because of the numerous options they present. And so, as we improve and mature as pool players, we learn to appreciate the difficulty of the easiest shots on the table.