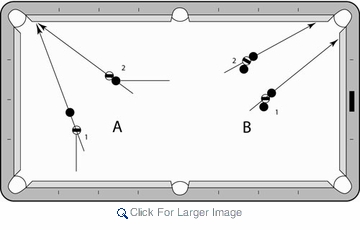 Every pool game demands more skill with certain shots than others. A good one-pocket player for example is usually a deft banker. Straight pool, because of so much play with a partially opened rack, calls for the knowledge to read frozen combination shots. These shots come up so rarely in 8 ball and 9 ball that an astonishingly high number of accomplished players in those games never learn the principles of pocketing frozen combinations that are not aimed for the pocket.

Although the shot occurs rarely in some games, learning it will give you a better understanding of the ways that balls react with one another and lead to improvement in all games. The combination shot in question is commonly known as a throw shot and comes up whenever two balls are frozen with their line of centers going to a rail near a pocket. Some players believe that the target ball in a frozen combination must go where it is aimed while others know that it can be thrown but do not know how. Look at the two combination shots in part A of the diagram and note that the lines of centers for both go to the same spot on the rail. To move the solid ball in shot 1 toward the pocket the shooter would cut the striped ball to the right and move the solid ball to the left as indicated by the line to the striped ball. The shooter is simply moving the striped ball over to hit the solid ball at a contact point to the right of the line of centers, the same point one would hit the solid with the cue ball to pocket it.

Pocketing the striped ball in shot 2 requires a different approach even though intuition and experience initially compel a player to attempt moving it toward the pocket in the same way one would with any combination shot. It is very important to understand that when two balls are frozen, it is impossible to change the contact point from the line of centers. Pocketing the striped ball in shot 2 entails the use of friction to move it toward the pocket rather than changing the contact point. When the solid ball is struck to the right of the line of centers as indicated in the diagram, the force from that direction moves the striped ball to the pocket because of friction between the two object balls. Leaving physics aside the best way to approach a frozen combination is to play it counter intuitively or opposite from the way you would play a combination shot in which the balls are separated. Note that the balls do not have to be frozen to throw. Balls that are very close also respond to this effect up to about a quarter of an inch apart, the distance at which the target ball tends to go where it is aimed despite all attempts to move it. Set up a few frozen combinations aimed near the pocket and shoot them until you are comfortable with the counter-intuitive technique described.

In straight pool you will often find these shots in a rack that has been only slightly disturbed, which means that they will occur in arrangements involving as many as five or six balls. For shots involving more than two balls, the key ball is always the third ball. If the third ball will hit the second ball on the same side as you would hit it with the cue ball, the shot will go. Look at shots 1 and 2 in part B of the diagram and choose the one that will go when you hit the third ball. In shot 1 the third ball is touching the second one in the place where you would want to hit it with the cue ball, making 1 the correct choice. If you hit the third ball in shot 2 the target ball will be thrown to the left and farther away from the pocket. Regardless of the number of balls involved it is always the third ball that determines whether the shot will go.

Because frozen combinations occur most frequently in straight pool, learning the techniques for manipulating them lost its priority after 9 ball took over as the popular, competitive game. The shot will appear in every game however making the little time required to learn it a rewarding investment. Great players combine their knowledge and experience from all games for a competitive edge.