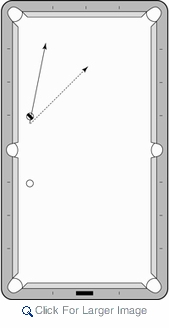 When beginners and intermediate players work on cue-ball technique, for some reason the draw shot always receives the greatest attention. Perhaps that owes to the fact that when we first start playing, we tend not to apply any control to the cue ball, allowing it instead to roll naturally on every shot and continue rolling forward after hitting an object ball. So, when a beginner sees someone else move a cue ball backwards, the first thought that comes to mind probably relates to all those nasty scratches that can now be avoided with a little backspin. Either that or maybe it’s because the draw is simply a lot sexier.

Whatever the reason, and despite that a naturally rolling cue ball will roll forward behind an object ball, good, strong follow is a skill that eludes many otherwise competent players. Before moving on to a practice shot we must consider follow in terms of the specific stroke it requires. So far we’ve worked the bottom half of the cue ball for stop and draw shots with punch and draw strokes. Now it’s time to move upstairs to explore the follow shot and its corresponding stroke. In contrast to the punch stroke, which calls for an extra snap toward the end of the stroke, the follow stroke requires a much smoother approach to the cue ball. While it can be a very powerful stroke with good acceleration, we must apply that acceleration with a smooth, constant delivery as opposed to the explosive acceleration of punch and draw strokes. Billiard players coach the follow stroke by reminding the student to keep the tip on the cue ball.

In the diagram we have a shot that works to develop an effective follow stroke. Straddle the side pocket with the cue ball and an object ball two diamonds apart as shown, and each ball exactly one ball width away from the cushion. The goal with this shot is to roll the cue ball forward as close to the line of the shot as possible as seen with the solid line. It’s important to use as much pocket as possible, shooting the object ball into the far facing of the corner as opposed to letting it hit the left side rail, an angle that causes extra lateral cue-ball movement. For that reason, it’s a good idea to practice this shot on a regulation table rather than a coin-op.

Begin with the tip as high as possible on the cue ball, a level stroke and some soft shots at first to get familiar with the shot and a smooth stroke. At slow speeds the cue ball should track easily near the solid line and maybe even a little better to hit the top rail closer to the corner pocket. Gradually add speed to the shot and observe the cue ball’s track. The major challenge on follow shots is adding speed while maintaining smooth, constant acceleration without adding any punch to the stroke. Punch will remove the desired top spin and cause the cue ball to limp toward the dotted line. Our goal with this shot is to produce a follow stroke that drives the cue ball forward near the solid line.

As you add speed to the shot, you must not allow the cue ball to drift across to the right half of the table. Add speed gradually, with a high hit, a level cue and a smooth stroke until the cue ball rebounds from the top rail and comes back to the side pocket without crossing over the center line to the right half of the table. If the cue ball crosses that line, it’s most likely from punch in the stroke so you must go back to a previous speed to capture the feeling of a smoothly accelerating follow stroke. Eventually, you will be able to hit a driving follow shot with enough speed to return the cue ball down to the bottom rail without crossing the center line if you apply gradual gains in speed toward that goal. It won’t be long before you are hitting powerful, professional-grade follow shots comfortably.