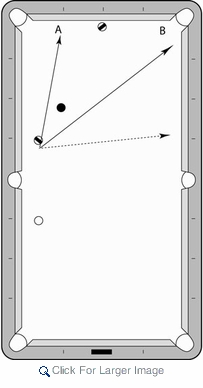 Most pool players learn to control the cue ball in the context of where they hit it to produce different results. And as they practice various shots they develop the necessary strokes to hit most of them. However, if they associate observed results with spots on the cue ball, they can remain unaware of the fact that pool calls for a number of different strokes, even as they acquire those strokes. Any player who can make the cue ball draw and follow possesses the required strokes for those shots. The major problem with learning position play in the context of spots on the cue ball is that it leads players to apply the same stroke, unconsciously, any time the tip moves to a certain place on the cue ball. In other words, when the tip goes low, the draw stroke comes out automatically, and that player remains limited to the small set of position possibilities associated with one stroke for one spot on the cue ball. We, on the other hand, are going to separate those two variables in order to open ourselves up to the full spectrum of possibilities available when we know that we can apply any stroke we wish to any shot.

In the diagram we see a shot very similar to last month’s except that we’re going to move the cue ball and the striped object ball a little farther away from the left, side rail for the setup, about 11/2 ball widths each. Be sure to mark the balls’ positions in order to reproduce the shot exactly for every trial. Place another stripe on the top rail as shown and an obstructing solid ball as shown. You may have to adjust the solid ball’s position to make the shot work. It must be positioned so the cue ball can pass it on both sides as shown with the solid arrows.

The dotted line shows the path that the cue ball will take if you hit a stop shot, tracing the track that’s 90 degrees to the path that the object ball will take to the pocket. Since that is a stop shot I want to call every possible track above it, including the two solid arrows, follow shots. In this exercise we will hit two different follow shots to play position for the second striped ball into both of the top corners. If we call both of those tracks follow shots since the cue ball is moving forward of stop-shot track, we see immediately that there are different kinds of follow shots. There are indeed many, and we are going to learn how to differentiate them primarily by employing different strokes and adjusting other relevant variables as well.

To pass the solid ball on the left side toward position A, you want to hit the cue ball high with a smooth level stroke and no right or left-hand english. This particular shot will not require much speed as the cue ball will drive forward with the necessary topspin. Applying any punch to the stroke will cause the cue ball to veer too wide to the right and run into the solid ball. If that’s happening, continue shooting with your focus on maintaining smooth, gradual acceleration.

Suppose now, that you want to pass the solid ball on the right side and still follow forward for a shot on the second stripe into the top-left corner from position B. That’s also a follow shot but one that is dramatically different from the first one. For this shot you want to hit the cue ball above center, but not at the top, and add a snappy punch to the stroke to widen the cue ball’s track. Again, do not use any right or left-hand english. In order to reacquaint yourself with the punch stroke you can move your tip to just below center and hit some firm, stop shots that track along the dotted-line path. With a handle on the stroke and more speed than the first shot, move your tip higher and hit some firm punches until the cue ball is moving forward, across the table, toward the right side rail. Experienced players to whom this concept is new may have a little adjustment period since they may not be familiar with applying a new stroke to an old shot.

For a complete understanding of how stroke affects the cue-ball’s track, try removing the solid and the second stripe to explore every track between A and the dotted, stop-shot line. Every razor line that you can imagine in that range is available with the proper measure of punch, speed and the spot on the cue ball. The last two variables play a role but your practice with this shot and your exploration of every possible track will reveal that your stroke and the way your tip’s acceleration meets the cue ball play the dominant role. How you hit the cue ball influences the outcome more strongly than where you hit it. The good news then is that the answer is in your own hand.