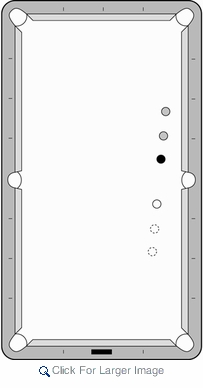 Even though everyone who wants to play good pool eventually learns how to draw the cue ball, almost all of us would like to do it better. And, as with anything else, when we want to improve with something, we usually try harder. But for some reason with draw, no matter how hard we try, the improvement we seek eludes us. So we try harder still, but to no avail.

As it turns out, the number-one cause of bad or weak draw is trying too hard. Whenever we face a challenge that we perceive near the limit of accomplishment, we’re conditioned to try harder to meet that challenge. The problem lies in the fact that trying usually causes tension, the pool stroke’s worst enemy. In pool, tension manifests itself in the shooting hand, causing a tighter grip and therefore killing the cue’s acceleration. On many draw shots, squeezing during the moment of impact moves the butt of the cue upwards into the hand, thus moving the tip downward for a miscue. When the next opportunity arises, a player with a miscue in his memory is likely to try even harder and only repeat the disaster.

The main key to good draw is a relaxed shooting hand with a light grip for maximum acceleration at impact. In the diagram we have an exercise to strengthen the draw stroke and make it more powerful. Often a player seeking to develop strong draw will set up a long, difficult shot and then shoot it repeatedly with mounting effort and tension and move success increasingly further out of reach. A more effective approach is to begin with something a little less heroic, find success and then build from there.

In the diagram we see a shot with the cue ball and the black, solid ball about a diamond segment apart from each other. Set up the shot to pocket the object ball in the top, right corner and draw the cue ball back to hit the bottom cushion. Before you get down to shoot, look at the shot. It should appear comfortably easy, the critical element for success. If the shot appears difficult, set up an easier shot for yourself. Now, play the shot to draw the cue ball back to the bottom cushion with a smooth, soft stroke. Remember to keep the fingers in your shooting hand relaxed throughout the stroke, especially at impact. Many players tend to squeeze the cue at impact, but a powerful stroke does the opposite, releasing grip tension at impact to maximize acceleration. At the end of a good stroke, your shooting hand will feel empty. Also, remember to hit the cue ball at its bottom. Another common problem with draw shots among beginning and intermediate players is not hitting the cue ball low enough. Observe how low professionals hit the cue ball on draw shots. Most of them have their tips on the cloth while preparing. If you come through with a level, relaxed stroke you can hit the cue ball at its very bottom. While practicing, there’s no need to fear a miscue. It makes an awful sound but it does not hurt and, since we’re not skydivers, we can afford to make mistakes while learning. For maximum draw you must hit the cue ball as low as possible.

Play the shot until drawing the cue ball back looks and feels easy. Pay attention to the way you feel about the shot while looking at it in preparation to shoot. When you know that you’re staying relaxed and accelerating through the cue ball without excessive speed, move the balls a little farther apart and look at the shot. Does it still look easy? At some point as the shot gets longer, it will appear difficult. This is the point at which we are likely to tense up and try too hard. When you find the distance at which the shot appears difficult, go back to the last shorter distance and work to capture the relaxed, confident feeling from that distance. When you return to the longer shot, tell yourself that it’s easy and that you will stay relaxed. To break through the challenge barrier, you can play a few shots to draw the cue ball back a mere two feet or so to acquire the feeling of any draw at all at that distance. Then, remembering to stay relaxed, add the necessary speed to bring it all the way back to the rail. Keep working in this fashion and it won’t be long before you are drawing the length of the table on shots with the two balls separated by a table length’s distance.

When someone is good at something onlookers will commonly say that person makes it look easy. When we recall our own best performances chances are that we remember ourselves flowing through them comfortably, and not straining under the weight of a great effort. While learning and then executing the draw shot, remember to relax and make it look easy.