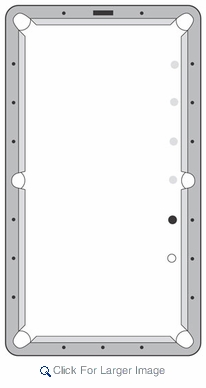 There are aspects of the game that occur so frequently in play and seem so simple to execute that it might seem pointless, if not ridiculous, to spend precious time practicing anything so elementary. Imagine, for example, going to the poolroom and then paying money to practice shooting at hangers. Even worse, imagine being seen working on something so outrageously easy. But once in a while, we encounter a ball hanging in the pocket and, for whatever reason, commit a position blunder that ends the run and maybe loses the match. Sometimes we must spend a little time with pool’s simple shots.

In the realm of position play we have the simple stop shot, the first shot most of us learned after catching on to the idea that we have some say in the matter of where the cue ball goes. Unfortunately, because of its simplicity, many players do not see its power and therefore ignore it in practice, leaning instead toward something a little flashier. But try to think of another shot that offers the same, reliable precision and the confidence that goes with knowing the exact dot on which the cue ball will come to rest. In reality the stop shot is the cornerstone of position play and, because of the unmatched control it gives us over the future, the most powerful shot we have at our disposal.

In the diagram we see an old exercise. I first saw it in Ray Martin’s 99 Critical Shots and present it here with a little embellishment. Before shooting however we must acknowledge another breakthrough billiards writer and discuss the stroke we will use throughout the exercise. When The Monk published Point The Way in the early nineties, he introduced us to something that all great players know and apply but, before then, had not shared—the concept of stroke and the different ones that make up a complete pool game. Since his descriptions and names for the various strokes cannot be improved I like to use them also in order to maintain consistency throughout the world of instruction and avoid confusing students.

In The Monk’s lexicon we find, among others, the punch stroke, and learn that it’s the one we apply for a stop shot. Very simply, we execute a punch stroke by adding a little extra acceleration just before the tip hits the cue ball. Think of it as adding some snap with a relaxed shooting hand or perhaps, shifting gears to gain a little speed. We must not let the name imply a jab or short follow through. A good punch stroke accelerates through the cue ball with a long, straight follow through. And we must not think of it as a necessarily hard hit. The punch stroke lives at all speeds and is often seen in very soft, finesse shots.

With the snappy punch stroke in mind we can proceed to the exercise. In the diagram we see a straight-in shot on the black solid ball with four more gray balls on the table. The exercise calls for executing a stop shot at each diamond indicated by the five balls. The cue ball stays at the second diamond for every shot while the object ball will move farther away, one diamond segment at a time. So, to complete the exercise you must execute a stop shot at each diamond. A committed player will shoot ten, even twenty, stop shots at first diamond before moving the object ball to the next spot in front of the side pocket for ten or twenty more, and so on to completion. Remember, this is not an exercise to see how fast you can shoot five shots. Play each shot all by itself in a tournament tempo with a proper and complete pre-shot routine.

For total mastery you must complete the exercise in two different ways. First, play the initial shot with the lowest, softest hit possible. As the object ball moves farther away, keep the tip at the bottom of the cue ball and add the necessary speed required to stop the cue ball at the longer distance. Each subsequent shot will require a little more speed. In the second trial, choose a medium-firm speed to make that first stop shot with the tip just below the cue ball’s center. As the object ball moves farther away, maintain the same speed and move the tip slightly lower on the cue ball to stop it at the new, longer distance. Proceeding through the exercise in both ways will ingrain the relationship between speed and tip placement for any distance on the table.

This exercise has been around forever and deservedly so. Mastering the stop shot, more than anything, is the foundation on which we build a complete position game. We must be able to execute a stop shot at all distances and speeds, in all conditions and under any kind of pressure. Master the stop shot to the point where all doubt has vanished when looking at one and watch your confidence jump to a new level.