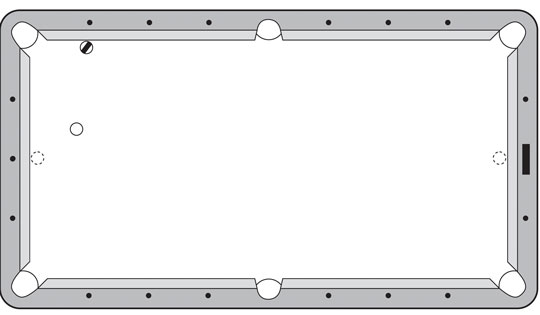 Following our initial work with fundamentals, everything we’ve discussed so far has related to pocketing balls or playing better position to run more balls. This month we’re going to shift our attention to the one aspect of the game that undeniably places pool at the pinnacle of the leisure sports—safety play. If I’m playing darts or golf with someone and that person is kicking my butt, I have no choice but to stand by quietly and watch it happen. But if we play pool together I can limit that same person’s opportunities to the shots that I allow. A strong argument can be made for the fact that much of pool’s greatness lies in the control we have over the shots our opponents get to play.

Because opportunities for safety play come in so many forms there’s no limit to the possibilities. And even though we occasionally face a problem that demands a safety shot never tried before, many safeties occur in recognizable setups that we can practice and master. To simplify our treatment of safety we’re going to confine the discussion to 9-ball, which means that we’re talking about safeties where we keep the object ball on the table. Because of that, safeties often demand precise speed control with the cue ball as well as the object ball, an added speed challenge that’s absent when we’re pocketing balls.

Despite a vast range of possible shots I always begin a discussion on safety with the shot in the diagram. While it appears simple, it works well to illustrate the fundamental principle of passing up a tough shot to leave a tougher one for the other player. In addition, the shot serves as a perfect introduction to precise speed control.

If the game is 9 ball then our setup in the diagram offers a cross-corner bank for the game winner. While it may not be the toughest shot, even the easiest bank shots are difficult, and a miss here would probably sell out the game. Instead of the risky bank, we’re going to practice a safety that wins a large majority of games in this situation. Very simply, the shot is to bank the 9 ball to the center of the left short rail while sending the cue ball to the other end of the table to rest on the right short rail at the trademark, as shown with the dotted outlined balls. From there, replying with an effective safety is considerably tougher than the initial shot, and pocketing the 9 ball calls for a near miracle.

Executing the shot as shown requires attention to several details. First and most important is speed. If the 9 ball moves half way across the table as shown, there will be no easy shot, regardless of how far the cue ball travels. So practice cutting the 9 ball thin on its right side and banking it softly to the middle of the short rail. Since leaving the 9 almost anywhere on the short rail will yield a difficult shot, there is some margin for error. However, the difference in power between banking it half way across and all the way across is virtually immeasurable, so practice the speed until getting it to the center of the rail feels natural.

Although controlling the 9 ball’s speed is the top priority on this shot, getting the cue ball to the opposite short rail is also important since that results in the most difficult possible shot. Keep in mind that the balls do not have to come to rest exactly as shown. The outcome in the diagram is ideal, but anything with the two balls at opposite ends and the 9 ball on the rail will get the job done. Moving the cue ball to other short rail with such slight speed will require a healthy dose of right-hand english along with a stroke that works best to apply maximum english at slow speeds. Place your bridge hand close to the cue ball, within three inches. Then, with a very light grip give the tip a kind of flick stroke on the cue ball’s right edge, making sure to feel the shot in the fingers of your shooting hand. That delicate stroke also helps ensure against hitting the shot too hard and leaving an easy shot for your opponent.

Generally, a player’s knowledge of safety and ability to execute effective ones indicates experience and sophistication. In fact, over a lifetime of pool, I have seen exactly one player who picked up on the subtleties of safety play well before he could run a rack. He’s an extremely smart individual who became very dangerous once he realized that he could win pool games with intelligence. Practice this month’s shot with a friend. Play it against each other in sets of ten to see who wins more games. Once proper execution becomes consistent, the player shooting the safety will have a strong advantage over the player on its receiving end. It won’t take long to see how much power there is in the control you can exert on your opponents