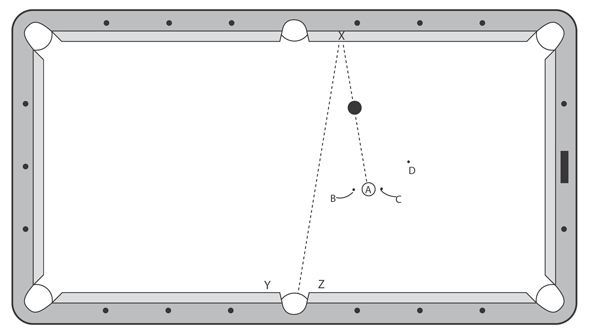 One of the first thrills we experience in pool is the successful conversion of a clutch bank shot, one where planning and execution combine perfectly to overcome complexity and difficulty. But more gratifying than the shot’s execution is the presence of others to witness the artistry since few of us are immune to the seduction of showing off. When beginners ask me for help with bank shots they’re likely to hear the following response. “Work on your position play so you won’t have to shoot bank shots,” or “I’ll bet you’re banking balls that should be cut directly into the pocket.”

There’s no question that beginning players shoot and miss too many banks while experienced players who know their difficulty work to avoid them. However, most great players are great bankers, and often pretty stubborn about remaining at the table. There are situations where playing a bank shot is your best option and you should feel comfortable taking the shot. Let’s shoot some banks this month and explore my favorite topic to avoid.

When shooting a bank shot there are three major factors that influence the object ball’s behavior off of the rail; speed, english and the angle at which the cue ball contacts the object ball. Begin with the shot in the diagram, a straight in bank or one where the angle of rebound equals the angle of entry and goes to the pocket across the table. I call that equal rebound angle the natural angle of the shot. With the cue ball at point A play the shot with medium speed and a stop shot to make certain that you are hitting the object ball dead straight on. The ball should bank one rail to the side pocket. Now try the shot with a very soft hit and a very hard hit. You should find that the softly played shot goes wide of the pocket toward Y while the one played hard returns tight near Z. Move the cue ball to C and play the shot hard. Does the ball “tighten up” off of the rail to hit the pocket? Try the shot from point B with a soft hit to see if it widens off of the rail to hit the pocket. Pay attention to the cue ball on these shots to be sure you are hitting the object ball straight on; if the cue ball moves left or right you are cutting the object ball right or left. You will find that wide angle banks such as a long cross corner widen out more with a softer hit while short angles like the one in the diagram are easier to tighten with more speed.

The second influential factor in determining the course of a bank shot is the use of english and its transfer from the cue ball to the object ball. Stated simply, when you apply right-hand english to the cue ball it will transfer left english to the object ball and left will transfer right because of the friction between the two balls and what’s called the gear effect. Set up the shot again and pocket the bank a few times from point A with no english. Shoot one now with right-hand english and observe the results. If you hit the object ball straight on you probably sent it well past the pocket as the right transferred left to the object ball to widen the shot. Similarly shooting the shot from A with left english will tighten the bank making it hit the opposite rail short of the pocket. Move the cue ball to B and with a medium-speed stop shot find the amount of right-hand english needed to widen the new natural angle enough to pocket the ball. From point C play it the same way until you find the amount of left-hand english required to tighten the natural angle and pocket the ball. You should find that the amount of english required to pocket the ball from either side is rather slight thus demonstrating how pronounced the effect of english is on a bank shot.

The third variable and one overlooked by too many players is how the object ball will behave if you are not hitting it straight on. Whenever you cut a ball, even with a center cue-ball hit, you transfer english to the object ball as the cue ball strikes that ball on its side similar to the way your tip strikes the cue ball on its side to apply english. Cutting a ball to left transfers right to it while cutting it to the right will transfer left. So when you play the shot in the diagram from point B with medium speed and no english you must cut the ball slightly to the left of X to compensate for the right english you are transferring. Playing it from point D forces you to cut the object ball to the right of point X to compensate for the left you are transferring to the ball. The rule to keep in mind for playing shots like these couldn’t be simpler; whenever you need to cut a bank shot in either direction you must cut the ball thinner than you would think.

Understanding the effects of speed, english and cut angle on banks will give you a solid set of guidelines for learning bank shots. Ultimately your feel will dictate how you decide to hit bank shots as you will often combine elements from all three principles. Since your feel for playing banks develops as you shoot them you should set up and shoot many different bank shots while observing the effects of the principles discussed above. A great way to learn banks and to see their many varieties is to play bank pool where each player has to bank every shot; the first player to make eight from a full rack is the winner. As your banking experience grows you will approach a balance where you are shooting fewer banks but playing them with greater confidence whenever the bank is your best option.