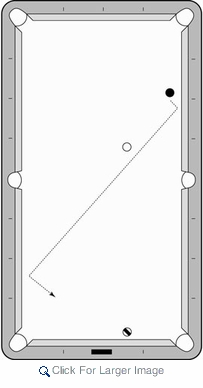 Now that we’re able to look at various shots and separate the popular name for the result from the stroke most commonly associated with that result, we can enter a world of position play where a select few players dwell and almost anything is possible. Last month we explored a certain follow shot that requires the stroke we use for a stop shot. Now we can look at my favorite example of a draw shot that’s best played with a follow stroke.

In the diagram we see a very common draw shot that comes up most frequently in 9 ball. We see the shot in all games but often opt for another choice in games where we have the luxury of shot selection. In 9 ball however, where we must shoot the balls in numerical order and repeatedly cover great distances with the cue ball, we encounter this shot frequently, sometimes as often as three or four times in the same rack. In any event it’s a draw shot that demands proficiency in order to play competitively.

Just about everyone who plays pool long enough, and applies some effort to the task, learns to draw the cue ball. First, we hear that we must hit the cue ball low to make it draw. And we learn, often unconsciously, that the low hit is only part of the story. In tandem with the low hit we must also apply a snappy, rapidly accelerating stroke to produce the kind of backspin that makes the cue ball zip backwards off of the object ball. That snappy stroke is a draw stroke and is triggered automatically for many players whenever the tip moves toward the cue ball’s bottom.

The shot we see in the diagram calls for something different however. While it is certainly a draw shot, it is a special kind of draw shot that moves the cue ball backwards off of the side rail. Most players would look at the shot in the diagram and guess correctly that adding some right-hand english to the draw will help move the cue ball back down to the bottom of the table for the next shot on the striped ball. And that’s precisely what makes this shot different from most draw shots. Because the cue ball does not have much room to draw backwards before hitting the side cushion, the right-hand english is the more operative factor for moving the cue ball into position. And because of that, the shot calls for a stroke that differs from the standard draw stroke.

Because the shot is more of a spin shot than a draw shot, it is best played with a long, languid follow stroke instead of a snappy draw stroke. Set up the shot as shown and play it a few times without thinking about it, while paying attention to your stroke and the result. Most players shoot this shot too hard and therefore struggle to get the cue ball past the side pocket. Now set it up and, making sure to move your tip as far down to the cue ball’s bottom right edge as possible, play it with a long, smooth, slow stroke. If a 3-cushion billiard player were coaching this shot, he would tell you to keep your tip on the cue ball as you come through. That’s a great image to have in mind as it works to keep the acceleration constant as opposed to the explosive acceleration we usually associate with a draw shot. The long, smooth follow stroke, with long follow through, is necessary to apply maximum sidespin to the cue ball, the kind of spin that makes this shot work.

Play the shot repeatedly and observe how the slower you seem to come through the cue ball, the farther back it moves for you. Remember to shoot at the edge of the cue ball for maximum draw and right-hand english—down around 5 O’clock. In fact, if you don’t miscue at least once, you probably aren’t close enough to the cue ball’s edge with your tip. Great players use the entire cue ball, and the only way to find its limits is with some miscues. They sound awful, I know, but in practice they cause no harm.

This common position shot may be pool’s best example of the old principle of less is more. When teaching this shot I encounter the greatest resistance from experienced players who often find it difficult to separate a low hit from the draw stroke. Players who never make such separations spend their pool careers on the game’s lower levels, sadly limited in the scope of their position play. As you become more comfortable with this shot, and the juxtaposition of draw with a follow stroke, you will see how less effort consistently produces more draw as you learn to make one of the game’s foundational shots look easy.